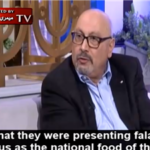 Palestinian thug who now represents PA in London, boasts with pride of mugging Israelis who said falafel was a national Israeli dish.

The man who the Palestinian Authority deemed appropriate to represent it officials in London, Manuel Hassassian, recently boast on Lebanese television that he once beat up an Israeli student at an American university in Ohio.

Hassassian was speaking on Al-Quds TV when he was asked about his student days at the University of Toledo.

Palestinian Ambassador to the U.K. Manuel Hassassian: As a Student I Hit an Israeli for Claiming Felafel Was the National Food of the Jews pic.twitter.com/ASuG7seeSP