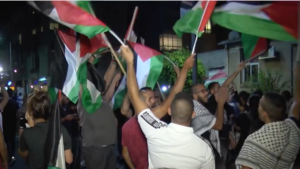 Many of those in Israel’s minority communities are troubled by the wording of the law, which in enshrining this as the “Jewish state” fails to mention at all the nation’s minorities or equality between all citizens, regardless of race or religion.

When the Druze community demonstrated against the law last week, they waved both Druze and Israeli flags, and profusely confessed their undying love for and loyalty to the state.

Saturday’s demonstration was different. Led by a large Arab contingent, the event was marked by a large number of Palestinian flags, and very few Israeli ones.

This aspect of the rally was rather ironic.

What those waving the Palestinian flags seem to forget is that the Palestinian Authority already long ago passed its version of the Nation-State Law, and that piece of legislation is about as racist and religiously discriminatory as they come.

The Palestinian Authority law in question defines a future Palestinian state as wholly Arab in identity, with no other official language than Arabic and no official religion beside Islam.

What of the Jews, Samaritans or any other ethnic minority that might continue to live in that Palestinian state? What of the dwindling Christian community? And why did the world not rise up in protest on their behalf when the PA passed this law?

Perhaps Israel’s new Nation-State Law is ill-conceived. Perhaps it could have been presented in way more inclusive of Israel’s minorities. What’s certain is that Israel is, once again, being subjected to a gross double standard when it comes to protecting its national identity.