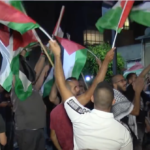 Many of those in Israel’s minority communities are troubled by the wording of the law, which in enshrining this as the “Jewish state” fails to mention at all the nation’s minorities or equality between all citizens, regardless of race or religion. Continue Reading »