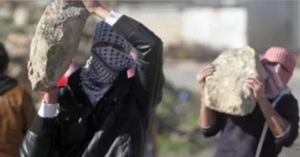 An IDF spokesperson announced that Israeli forces had thwarted an attempted terrorist attack near the N’ilin Junction on Sunday night. The soldiers identified a number of suspects throwing stones towards Israeli vehicles and fired at them, hitting and killing one of the suspects and injuring another who escaped from the scene. The soldiers are searching the scene.

The Palestinian WAFA news agency reported that a young Palestinian man was shot and killed by Israeli forces at the entrance to the town of Ni’lin, located west of Ramallah, on Sunday night. The Israeli forces shot at a vehicle, wounding the young man, local sources told WAFA. The news agency claimed that the IDF prevented an ambulance from transferring the young man to the hospital.

Pictures and video published from the scene of the incident showed IDF soldiers handling a stretcher with a young man on it and a car that had run off the road onto a median.

The incident came as the Palestinian Authority began implementing a mandatory quarantine on areas controlled by the PA as part of efforts to combat the coronavirus outbreak. All citizens are prohibited from leaving their homes as of 10 p.m. on Sunday for a period of two weeks.

Health facilities and employees, who can provide and show a proof of their IDs, and those who work at pharmacies, bakeries, grocery stores, gas and fuel stations, municipal services and water and electricity service facilities, are exempt from the mandatory quarantine, according to WAFA. Movement between governates of the PA is also banned.