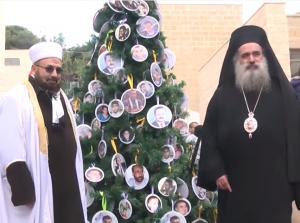 Channel 2 News reported that Hanna told those gathered at the tree that it constituted a “Christmas message [from] the heart of Palestine – we are one nation defending one issue…standing firm and remaining in the Holy Land.”

Israel Border Police later arrived and removed the photos of the dead terrorists from the tree’s branches.

We take the opportunity of this holiday gathering to express our gratitude to you for the firmness with which you defend the freedoms that lie at the heart of this democracy – especially the freedom of worship.

The State of Israel takes pride in the fact that [it] was founded on democratic principles in the Middle East and that it guarantees full freedom of worship; and we are confident, Mr. President, that you will continue to resist any restrictions on religious practices.

Theophilos is Greek, while Hanna is just the second Palestinian Arab to hold his current title. Many traditional churches in the Land turn far more anti-Israel when they appoint local Arab priests to positions of leadership.