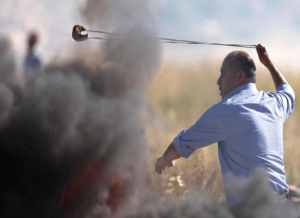 This, not being the first time Jamal Hawil, a senior official in the Al-Aqsa Martyrs’ Brigades has created a provocation in Judea and Samaria, so he was once imprisoned by Israel.

Jamal Hawil, a Palestinian Authority member of parliament representing the Fatah party, has been caught on camera throwing rocks at IDF soldiers near Ramallah.

The images were apparently captured last weekend, ahead of the events marking Nakba Day and against the backdrop of a hunger strike by Palestinian security prisoners.

Hawil was imprisoned in Israel for several years for holding a senior position in the Al-Aqsa Martyrs’ Brigade, a secular coalition of Palestinian terrorist organizations aligned with the Fatah party based in Judea and Samaria. He was released in 2009.

This is not the first time Hawil has created a provocation in Judea and Samaria.

On Monday, demonstrations marking Nakba Day, which mourns the displacement of Palestinian refugees during Israel’s War of Independence‎, were held in a number of Palestinian cities. In some cases, protesters clashed with security forces.