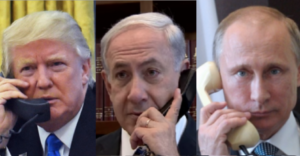 Quartet representatives discussed Israeli plans to annex portions of the West Bank, including the July 1 deadline for Israel to begin to apply such sovereignty as laid out in the coalition agreement between the Likud and Blue and White parties, according to a person familiar with the discussion.

The US was represented on Friday’s call by Avi Berkowitz, who is an assistant to US President Donald Trump and a special envoy for international negotiations.

While the US did not clarify its intentions were with regard to the July 1st date, Berkowitz did remind the Quartet that the US is proud of the Vision for Peace, which it unveiled in January of this year, the source said.

The US explained that the PA can engage with its peace process without agreeing to the plan as it is currently written. The PA can suggest “realistic edits, and meaningful compromises,” the source added.

Berkowitz also noted that both Prime Minister Benjamin Netanyahu and Alternate Prime Minister Benny Gantz have publicly agreed to the Trump plan, which is significant as the plan calls for a Palestinian state, among other Israeli concessions, the source said.

The Quartet is made up of representatives from the US, the United Nations, Russia and the European Union.

The Russian Foreign Ministry said that Friday’s Quartet video conference, in which its country was represented by Deputy Foreign Minister Sergey Vershinin, dealt with “ways to restore the peace process.”

Russia supports both a Quartet led process and would like to host peace talks between Abbas and Prime Minister Benjamin Netanyahu, according to the Foreign Ministry. It said that Russian Special Presidential Representative for the Middle East and Africa and Deputy Foreign Minister Mikhail Bogdanov spoke about these issues with Fatah Central Committee Hussein Sheikh.

The UN, Russia and the EU stand behind the PA’s call for a two-state resolution to the conflict based on the pre-1967 lines and in line with past international understandings and agreements.

However, the US side reiterated during the call that it is “unwilling to go back to ideas that haven’t worked for decades,” the source said.

Berkowitz said during the call that the US is firmly sticking behind the plan that they put out, but mentioned that the administration is willing to discuss the details of the plan. “It was clear that the plan is meant to be a starting point for the sides to come together and discuss,” the source said.

UN Special Coordinator for the Middle East Peace Process Nickolay Mladenov gave an update on the situation with the Palestinians and the PA’s recent decision to suspend agreements. He explained that PA’s intentions are still unclear, the source said.

The PA refused to engage with US peace plan since the Trump administration published its details. Instead, the PA threatened to leave all prior agreements. In speaking to the UN Security Council on Wednesday, Mladenov referred to the PA threat as “a cry for help.”

During the call, the sides discussed an idea of Quartet meeting regarding the peace plan, but it is unclear if any meeting will be arranged, the source added.

Tovah Lazaroff contributed to this report.

Why do I think the Quartet couldn’t care less about promoting yet another police-state that’s controlled by kleptocrats!? – [Rhetorical question.]