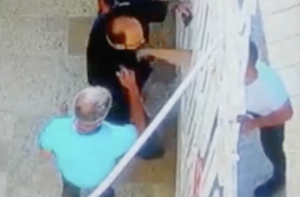 After 2 unidentified Palestinian men harassed a group of tourists entering the holy site and were asked to stop, one pulled his knife and stabbed the cleric in the chest.
– Robert Nicholson, founder of the Philos Project wrote, “This is what Palestinian Christians really have to deal with.”

A Franciscan friar was reportedly assaulted at Bethlehem’s Milk Grotto over the weekend in an incident caught on video. Fr. Fadi Shallufi, who administers the Catholic chapel site, was struck by an assailant on Friday.

According to a report on Arab48.com, two unidentified men harassed a group of tourists entering the church site. A complaint was made to Palestinian police, who then detained the two men. The attack was condemned by Bishop Atallah Hannah in a statement published online in which he called the action unacceptable. “We thank God that the injury was minor, but this action is a criminal act that is far from our human, moral and national values. We reject attacks against clerics.”

In the past Shallufi, who is from the Nazareth region in northern Israel, has been outspoken in support of coexistence at the Milk Grotto. “Both Muslims and Christians come to the Milk Grotto and show their great love for the Virgin Mary,” he said in an interview in mid-May 2018.

In Friday’s video, the friar can be seen shortly after 4 p.m. arguing with two men, one in a red shirt and the other in white. After he closed the gate through which tourists enter, the friar continues to exchange words with the men. One of the men then reaches into his pocket and pulls out a black object and lunges at the clergymen through the gate.

A knowledgeable source confirmed the attack and said the church had yet to issue a statement about the incident, but he expected one to be released Sunday. The source described the friar as well-known for being in charge of the Milk Grotto, adding that incidents like this can harm tourism so they are taken seriously by local Palestinian authorities.

Video of the assault on Shallufi spread on social media, with some accounts writing his name as Shaloofi. Robert Nicholson, founder of the Philos Project wrote, “This is what Palestinian Christians really have to deal with.”

According to a source within the church, assaults on clergy are very rare. But this incident, he said, had crossed a red line. He couldn’t think of more than two serious incidents in the last several decades, however, he did acknowledge that during times of political crises or on religious holidays there can be harassment and tension.