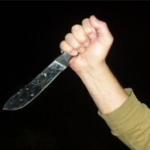 The hurt woman sustained moderate to serious wounds and was taken to hospital for treatment; the 19 yer-old Palestinian assailant was shot and seriously wounded at the scene.

A woman was moderately to seriously wounded in a suspected terror attack in Kfar Sava as Israel marked Memorial Day for its fallen soldiers and victims of terrorism.

The shot terrorist is watched at the scene of the terror attack in Kfar Sava by armed police as paramedics work to stop the bleeding of the 62-year-old woman.

Sirhan Sirhan, the Palestinian terrorist who shot US presidential candidate Robert F. Kennedy to death in 1968, is in stable condition after being tabbed in a San Diego prison.

Sirhan Sirhan, the Palestinian found guilty of shooting US presidential candidate Robert F. Kennedy to death in 1968, was wounded in a stabbing at a California prison on Friday, according to media reports.

Celebrity website TMZ, citing unnamed sources, was first to report that Sirhan, 75, had been stabbed.

Sirhan Sirhan on February 9, 2016, the day before his 15th parole rejection. – Photo: California Department of Corrections

Replying to a request for confirmation that Sirhan was wounded, Jeffrey Callison, a spokesman for the California Department of Corrections and Rehabilitation, said that an inmate had been stabbed at the Richard J. Continue Reading »

In the latest rash of violent anti-Semitic attacks in London this week alone, a knife-wielding suspect was running, yelling, ‘I’m going to chop off your head,’ as the Orthodox Jewish man ran for his life.

An Orthodox Jewish man was threatened with beheading after he was confronted by a knife-wielding man in London Monday.

The incident occurred in the Whitechapel section of London Monday morning, when a 34-year-old man accosted an Orthodox Jewish man in his 40s who was walking down the street to his place of work.

Flag of terror organization Hezbollah is hoisted during anti-Israel demonstration in London. 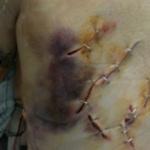 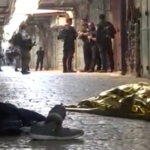 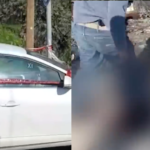 Knife wielding Palestinian terrorist suddenly opens passenger side door in attempt to stab schoolgirl, then shot dead by her armed father who was driving her to school.

A terrorist was shot and killed in Samaria Wednesday morning, during an attempted stabbing attack near the Hawara checkpoint south of Shechem (Nablus), an IDF spokesperson said.

The incident occurred at approximately 8:30 a.m. Wednesday, when a Palestinian Arab terrorist carrying a knife opened the door of a private Israeli vehicle as it passed near the Arab town of Hawara on Route 60. 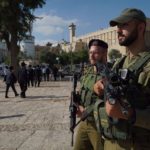 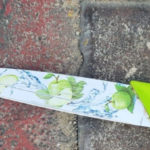 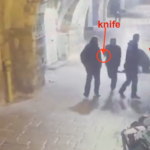