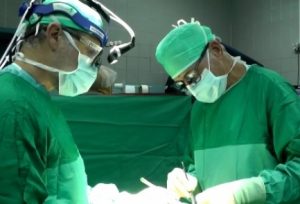 In less than 2 years approximately 60 corneal transplant surgeries have been performed in Gaza by Palestinian doctors who were trained in Israel.

​At the end of 2016, a new branch of St John’s Eye Hospital was opened in Gaza and, recently, corneal transplant surgeries have been performed in the Gaza Strip by Palestinian doctors who have undergone training in Israel.

Earlier this week, two Palestinian doctors who work at the Jerusalem hospital crossed into the Gaza Strip via the Erez crossing to perform rounds of treatments and corneal transplants at the St John’s hospital branch in Gaza. The two doctors work regularly at the St. John’s Hospital in Jerusalem and once every two months travel to Gaza in order to perform transplants and provide other services to patients living in the Gaza Strip. They bring their medical equipment from Jerusalem to Gaza in order to give their patients the best treatment possible.

Dalia Bassa, the Health Coordinator of the Civil Administration, together with the Gaza Coordination and Liaison Administration, coordinate the entry of doctors to the Gaza Strip and their return to the hospital in Jerusalem. Bassa stated that “We bring medical care to Gazans and save them the aggravation of leaving home and going to a distant hospital in Judea and Samaria. When patients leave Gaza, they need to be accompanied and have a place to sleep, which they have near their homes in the Gaza Strip and not in Jerusalem”.

Cornea surgery is an important operation and saves the lives of many Palestinian patients a year. ​Since the beginning of 2017, approximately 60 corneal transplant surgeries have been performed by doctors in Gaza.

View original Coordination of Government Activities in the Territories website publication at:
http://www.cogat.mod.gov.il/en/Our_Activities/Pages/Gaza-Corneal-Transplants-15.11.17.aspx