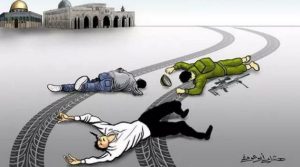 The soldiers were patrolling a main artery south of the Gush Etzion junction when a private vehicle suddenly swerved and hit them. Two of the soldiers sustained light injuries and a third was hospitalized in moderate condition.

The scene of the car ramming attack near the Gush Etzion junction in Judea and Samaria, Monday – Photo: Reuters

The IDF Spokesperson’s Unit issued a statement immediately following the attack, saying that “a terrorist rammed three soldiers with his vehicle while they were engaged in engineering operations along the axis between Beit Ummar and Al-Arroub [Palestinian refugee camp]. One soldier was moderately hurt and two others sustained light injuries. One of the patrol soldiers fired and neutralized the terrorist. The soldiers have been evacuated to hospitals for continued medical care.”

The attacker, from the Dheisheh refugee camp south of Bethlehem, was pronounced dead at the scene after being examined by Red Crescent personnel.

The Route 60 highway, where the incident occurred, is frequented by both Jews and Palestinians.

Two weeks ago, four Israeli police officers were lightly hurt in a stabbing attack at the Armon Hanatziv police station in Jerusalem. A Palestinian attacker entered the station from a back door and stabbed a border policeman before being subdued.

During the altercation with the terrorist, a number of additional officers were hurt, one of them apparently from friendly fire.