Palestinians burn effigies of Netanyahu & Peres at demonstrations in Gaza.

Marking thirteen years to the second Palestinian uprising (intifada), Palestinian protesters clashed with Israeli security forces in the West Bank, in Jerusalem and on the Gaza Strip border. 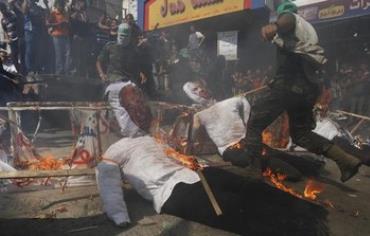 Protesters hurled stones and burned tires in clashes across the West Bank.

An IDF soldier was lightly injured in Beit Ummar near Hebron from rocks, but did not need to be taken to hospital for treatment, the IDF said.

Near Rachel’s Tomb in Bethlehem, some 100 protesters clashed with security forces, throwing makeshift grenades, according to Army Radio.

Some 80 protesters clashed with security forces in Kafr Qaddum, and have already been dispersed by the IDF.

At least three Palestinians were injured in clashes outside Ofer prison in Qalandiya, Ma’an reported, where some 80 protesters threw rocks at security forces and burned tires.

Additionally, some 150 protesters demonstrated in Beitunia west of Ramallah, some 120 protested in Prigat junction, and some 250 rioted in Palestinian refugee camp Jalazone north of Ramallah, an IDF spokeswoman said.

Earlier in the day, the IDF dispersed a gathering of some 300 Palestinians near the Gaza border fence.

In central Gaza, protesters burned effigies of Prime Minister Binyamin Netanyahu and President Shimon Peres, as well as a model of the Jewish Temple.

In Jerusalem, 13 Palestinians have been arrested in clashes with Israel Police in the Old City. One policeman was hit in the face by rocks, and received treatment on the scene, Army Radio reported.

Following the morning prayers at the Temple Mount stone throwing broke out outside of the old city’s Damascus Gate, in the east Jerusalem neighborhood Ras al-Amud, near the Rockefeller Museum and near the Church of All Nations, according to Israel Radio.

Palestinian militants and youth groups have called for a general uprising in response to the entry by Jewish groups under police escort to the Temple Mount, which is revered by both Muslims and Jews.

Earlier on Friday police limited the entrance for Muslim worshipers to the Temple Mount to men over the age of 50 with Israeli IDs and in an attempt to prevent riots.

On Tuesday the holy site was closed after police received threats of rioting by Palestinians at the compound.

Palestinian protests over a visit to the al-Aqsa mosque compound by then opposition leader Ariel Sharon in September 2000 spiraled into deadly clashes and a five-year Palestinian uprising, known as the second Intifada.

Palestinians oppose Jewish worship at the plaza, which overlooks the Western Wall, seeing it as a first step toward restricting access to the area for Muslims and a deepening of Israeli control over the Old City.

But friction on the ground has risen during the High Holy Days, with Palestinian leaders complaining about swelling numbers of Jewish visitors, saying some of them try to defy an effective ban on praying on the vast esplanade.

“The uprising [in 2000] erupted when al-Aqsa mosque was stormed. They [the Israelis] are now raiding al-Aqsa every day,” a senior official with the Islamist Hamas group, Mushir Al-Masri, told thousands of supporters at a Gaza rally.

“We call upon our people to revolt against tyranny and aggression. Let a third Intifada be declared because this is the best way to teach the aggressors a lesson,” he said, adding that “every Jew” would be extracted from Jerusalem.

In a speech at the United Nations on Thursday, Palestinian Authority President Mahmoud Abbas made a public appeal for a halt to the al-Aqsa visits.

“There must be an end to the near-daily attacks on the religious sites in Occupied Jerusalem, at the forefront of which is al-Aqsa mosque, where the continuation of such attacks will have dire consequences,” he said.

Allies of Netanyahu have been among the most vocal advocates of Jewish prayer at the 35-acre site and the government has done little to stem the flow of visitors to the area.

Religious Jews revere the compound as the location of their ancient biblical temples. For Muslims, it is the place where Prophet Mohammed is believed to have ascended into heaven – the third holiest site in Islam.

Israel captured the site, along with the rest of east Jerusalem, the West Bank and Gaza Strip, in the 1967 Six Days War. The Jewish state then annexed east Jerusalem as part of its capital in a move never recognized internationally.