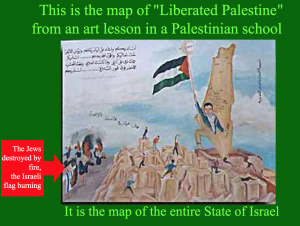 Maintaining their rights to use education as a tool in fulfilling their ultimate goal of acquiring all of Israel one day, Arab-Israeli Knesset Members released a statement acknowledging their intent to continue the Palestinian curriculum, which praises terrorists and treats Israel as a temporarily occupied area.

The Palestinian Authority and members of the Israeli Arab population slammed the Education Ministry for its “Israelizing” policies in education in the eastern part of Jerusalem.

The Palestinian Ministry of Education criticized the Jerusalem policies in a statement published on July 30. The statement was signed by Palestinian Education Minister Sabi Saydem, by several Israeli Arab public figures, and by Israeli-Arab MKs Ahmed Tibi and Jamal Zahalka.

The statement refers to the education efforts as “distorted” attempts to block the Palestinian curriculum, which praises terrorists and treats Israel as a temporarily occupied area.

Translated Arabic Text: “On this land is something worth living for” [Official PA TV, June 2, 2015] – Palestinian Media Watch (PMW)

The signers emphasized the Arab nature of the holy city with its Muslim and Christian sites, and called on all legal institutions to protect “Palestinian national identity, conserve the Palestinian education in its homeland and abroad, and to defend education as a basic right of man, as per international law.”