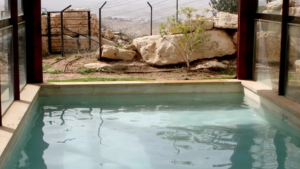 According to Al Jazeera, dozens of Israeli settlers in the West Bank are offering their homes to tourists.

One Airbnb user lists his home in the West Bank settlement of Tekoa under the headline “15 minutes from Jerusalem, inspiring.” For just over NIS 800 per night, guests could enjoy “three rooms, a balcony, a grape arbor, an orchard and a sitting area overlooking the spectacular Judea desert landscape.”

A Palestinian official was quoted by Al Jazeera as saying that Airbnb “is promoting stolen property on stolen land.”

When asked by Al Jazeera about the listings in the settlements, a spokesman for Airbnb denied any wrongdoing by the company.

“We follow laws and regulations on where we can do business and investigate concerns raised about specific listings,” a company spokesman said.

From Airbnb listing in the West Bank community of Anatto – Screenshot

“We are extremely proud of our thriving tourism industry, with hundreds of unique BnBs that offer breathtaking views and world class service,” said Miri Maoz-Ovadiah, a spokesperson for the Yesha Council of Jewish settlements. “Judea and Samaria is the cradle of Judeo/Christian civilization and millions of people want to visit. We welcome them all with open arms.”

The story was first reported by the liberal blog +972 Magazine.

Israel is the only country in the world that accepts the legitimacy of settlements beyond the 1967 Green Line. Its position is at odds with that of the international community, which believes that areas captured in the Six-Day War should be designated for a future Palestinian state in exchange for a peace treaty alongside Israel proper.

The issue of engaging in commercial activity in politically sensitive areas in the Middle East has become a contentious issue, particularly in light of plans by the European Union to label products manufactured in West Bank settlements.