Palestinians say their right to UN statehood was ratified in 1947 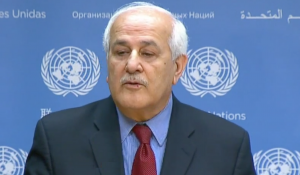 Having rejected the UN’s partition plan for statehood in 1947 and losing everything when the Arabs opted to declare war on Israel, now backtracking on that decision Palestinian UN envoy Riyad Mansour declares, “We believe that our statehood, and our admission, is an innate right… It is not open for negotiation with anyone – nor will we ask for permission from anyone.”

The Palestinian ambassador to the United Nations said Monday that the day will come when “obstacles” in the Security Council to full U.N. membership will be removed “but that day is not today.”

The main hurdle is the United States, a veto-wielding Security Council member that insists the Palestinians only gain full membership in the United Nations after negotiating a peace deal with Israel.

“We disagree with them on that,” Ambassador Riyad Mansour told a group of journalists. “We believe that our statehood, and our admission, is an innate right for the Palestinian people … to exercise it alone. It is not open for negotiation with anyone – nor will we ask for permission from anyone.”

Original United Nation’s Partition Map for the Jewish and Arab States that was formally refused by the Arab League.

Mansour said the legal right for Palestine to become a full member of the United Nations was formalized in the 1947 General Assembly resolution that partitioned British-ruled Palestine into “independent Arab and Jewish states.”

Israel was accepted as a U.N. member, he said, and Palestine “will continue fighting for that right.”

Mansour stressed that “negotiation is different than expressions of self-determination.”

Since then, Mansour said, “We have negotiated, and we could possibly, if the conditions are right.”

But the Palestinians’ distrust of U.S. President Donald Trump’s administration has escalated because of its pro-Israel stance, and has all but ended prospects of Israeli-Palestinian talks.

The Palestinians cut off ties with the administration over a year ago after Trump recognized contested Jerusalem as Israel’s capital.

PA President Mahmoud Abbas has said he will reject any peace plan the Trump team presents. The long-awaited plan is expected to be released after Israeli elections on April 9.

As for the prospect of revived Israeli-Palestinian negotiations, Mansour said if Jerusalem and Palestinian refugees are off the table, and settlements are “more or less off the table, what is there left to negotiate?”

He said Israel is violating the 1993 Oslo Accords signed by Israel and the Palestinians that stipulates that Jerusalem, refugees, settlements, borders and other issues are final status issues to be negotiated directly “and not one party to decide unilaterally the fate of any of these issues.”