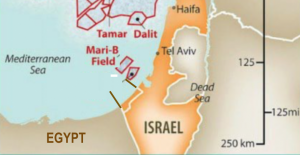 The goal is to establish an exclusive economic zone off the coast of the Gaza Strip under the UN Convention on the Law of the Sea, said ambassador Ryad Mansour.

The Palestinians became party to this and other UN treaties and agencies when they gained observer status at the United Nations in November 2012.

The talks with Egypt are at the preliminary stage, having begun recently with Egypt at the foreign minister level and then continued at the expert level, the ambassador said.

The Palestinian Authority has consulted “top lawyers in the field” to prepare its case and train its officials in the workings of maritime law, he added.

The Palestinian strategy is to reach agreements with two of its neighbors in the Mediterranean — first Egypt and then Cyprus — to define exclusive economic zones with respect to them, and then consult with lawyers as to what its potential borders with Israel could be.

Experts will then take an inventory of the natural resources claimed by the Palestinians and, and they will file their EEZ with the UN convention on the law of the sea.

It is a way to save time for future generations, said Mansour.

The Palestinians want to move as quickly as possible but these proceedings could take years, he added.

“For us the fact that we are a state, that our land is under occupation, and that we are joining conventions and treaties, means that we cannot run away from the responsibilities that these treaties and conventions require from us,” Mansour said.

“It is our right to declare our exclusive economic zone,” he said.

An EZZ is an area of the sea over which a country has special rights to explore for and use resources.

An EEZ general extends out 200 miles (370 km) from a country’s coast, while a nation’s territorial waters only extend 12 miles out.

But in the Mediterranean they overlap and need to be negotiated.

Neither Israel nor the United States have ratified the UN convention on the sea.

Israel has established its EEZ with respect to Cyprus through bilateral ties, but has failed to reach an agreement with Lebanon.