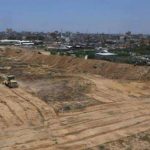 Egyptian military uses bulldozers to destroy an additional 140 homes along its unsecured border with Gaza to expand its buffer zone once again, this time in a coordinated effort with Hamas to prevent illicit weapons, ISIS and other militants from covertly crossing the border.

Egypt’s military has bulldozed at least 140 homes and more than 200 acres along the Gaza Strip border, expanding a buffer zone in an effort to cut off the flow of weapons and militants. 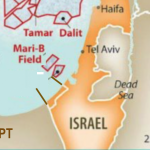 The 20 tunnels that were found & destroyed in November are part of Egypt’s policy, after it cleared a buffer zone along the Gaza border last year, in its attempt to eliminate the cross-border network of tunnels used for terrorism in the Sinai, & smuggling weapons to Hamas and other terror organizations in Gaza.

The Egyptian military says it has destroyed 20 recently discovered underground tunnels along the border with the Gaza Strip.

A Palestinian worker repairs a smuggling tunnel after it was flooded by Egyptian security forces – Photo: Reuters

The army says the tunnels were found and destroyed in November. Continue Reading »

Palestinians along Egypt’s border complain of constant explosions ‘worse than IDF operation’ as their homes are demolished, & Gaza’s economy collapses.

Residents in Gaza’s south, and particularly the Sinai border town of Rafah, are being expelled from their homes and having them demolished by dynamite and bulldozers – an expulsion world media has largely shied away from because it is being conducted by the Egyptian army.

The Egyptian expulsion to create a buffer zone follows lethal terrorist attacks on Egyptian soldiers in the Sinai last month, and the ensuing crackdown on smuggling tunnels from Gaza by which Hamas reportedly armed the attackers has already seen hundreds of homes destroyed. Continue Reading »

The Egyptian army continues expelling Arab residents and detonating buildings in its destruction of the Gazan side of the Egyptian border as the world is notably silent, even as Egypt reveals it will not refrain from taking action against Muslim clerics as well.

The Egyptian Waqf (Islamic trust) announced it will dismiss and expel Muslim clerics if smuggling tunnels are found below the mosques in which they serve, reports the Egyptian news agency Aswat Masriya. Continue Reading »

Hamas (AND the world) remains silent as tanks, helicopters and Egyptian soldiers force Gazans out of their homes before being blown up for Cairo imposed buffer zone, with no international criticism, condemnation, or protests.

Arab residents of Gaza were rounded up by armed soldiers and forced to flee their homes, which were promptly exploded in impressive plumes of dust and sand – but the soldiers were Egyptian, and there has been no international criticism of the buffer zone Egypt is establishing by force on the Gaza side of the Sinai border.

In the buffer zone plan, Egypt is seizing and evacuating all homes and farmland up to 500 meters (over 1,640 feet) into Gaza, all along the 13 kilometer (over eight mile) border.  Continue Reading »