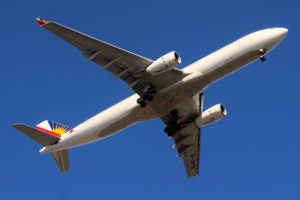 In time for their winter travel season, Philippine Airlines, the country’s national carrier, is seeking direct flights to Israel over Saudi Arabia, much like the consideration Air India received to launch their direct flights to the Jewish State in March 2018.
– Saudi overfly rights would shave at least an hour of travel time, reducing the cost substantially to Tel Aviv from Manila.

The Philippine government is said to be in talks with Saudi Arabia for the rights to fly through its airspace on a direct flight path to Israel, local Philippine media reports said Wednesday.

The negotiations are underway ahead of the anticipated launch of direct Manila-Tel Aviv flights by the state-owned Philippine Airlines this year, the reports said.

“We have rights already as far as Israel is concerned. Hopefully, we should get to overfly Saudi Arabia to Israel,” Philippine Transportation Undersecretary Manuel Tamayo was quoted as saying.

He added the securing Saudi overfly rights would shave at least one hour of travel time off of the Manila-Tel Aviv route.

Israel and the Philippines signed a bilateral air services agreement in 2013 allowing the countries’ to fly between any of their cities 21 times per week. But so far, no direct flights have been launched.

Philippine Airlines, the country’s national carrier, is eyeing the opening of direct flights to Israel in time for winter travel season.

“We’re pushing for the signing of the overfly agreement by this quarter as Israel is a seasonal market. Most passengers would like to travel there during the cold months,” Tamayo explained.

In March 2018, Air India launched the first direct flight to Tel Aviv crossing over Saudi airspace, ending a decades-long ban on the use of its airspace for commercial flights to Israel.

Israel’s national carrier El Al complained, however, that it was not given the same permissions undermining fair competition between the Israeli airline and foreign carriers.

The company expressed concern that the same permission would be given to other foreign airlines traveling various other routes that currently require El Al to make lengthy (and costly) detours.

Saudi Arabia and Israel have no official diplomatic relations, like much of the Arab world. The Air India overfly rights were therefore seen as a sign of major behind-the-scenes improvement in ties between the Kingdom and the Jewish State.