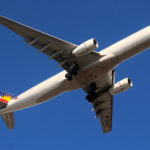 In time for their winter travel season, Philippine Airlines, the country’s national carrier, is seeking direct flights to Israel over Saudi Arabia, much like the consideration Air India received to launch their direct flights to the Jewish State in March 2018.
– Saudi overfly rights would shave at least an hour of travel time, reducing the cost substantially to Tel Aviv from Manila.

The Philippine government is said to be in talks with Saudi Arabia for the rights to fly through its airspace on a direct flight path to Israel, local Philippine media reports said Wednesday.

The negotiations are underway ahead of the anticipated launch of direct Manila-Tel Aviv flights by the state-owned Philippine Airlines this year, the reports said.