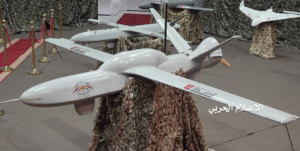 Lebanese terror group Hezbollah claimed earlier on Sunday that two Israeli drones came down over Beirut, with one of the pair being rigged with explosives and causing serious damage to a building housing Hezbollah’s media office.

First attributed to Israeli drones, broken windows are pictured after an Iran-made drone fell in the Hezbollah-dominated southern Beirut suburb, and another exploded near the ground in the Dahiyeh suburb of Beirut. 25 Aug 2019. – Photo: MOHAMED AZAKIR/REUTERS

The footage shows the same type of drones are used by Iranian allies – Shiite Houthi rebel groups – in Yemen and during attacks on oil facilities in Saudi Arabia.

In the meantime, Lebanese Prime Minister Saad Hariri has described the crash of two as violation and “aggression” against Lebanese sovereignty, adding that Israeli drones is a “threat to regional stability and attempt to increase tension.”

He said Sunday that the developments overnight constitute a threat to regional stability and an attempt to push the situation toward more escalation.

The reported incident came hours after the IAF struck an Iranian force near Syria’s capital Damascus, which Israel said had been planning to launch “killer drones” into its territory.