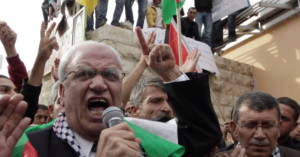 “Erekat had a quiet night but this morning his condition deteriorated and is now defined as critical, and due to respiratory distress he was intubated and sedated,” the hospital said in a statement. 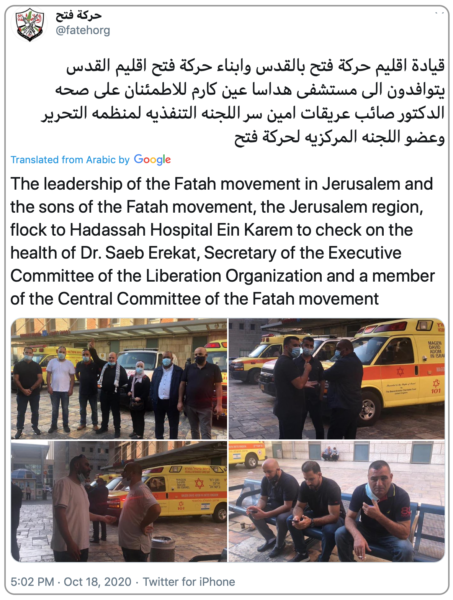 Doctors are concerned over Erekat’s vulnerability to the illness since he underwent a lung transplant in the United States in 2017.

Hadassah Medical Center issued a statement reporting that Erekat was “ventilated on high concentration of oxygen and on nitric oxide gas and is in the prone position. He has received concentrated convalescent plasma with high levels of anti-Covid antibodies.”

“We have consulted with specialists from Tel Aviv, New York and Washington,” the spokesman said, adding: “Prognosis remains very guarded.”

Meanwhile, bereaved Israeli families are holding demonstrations at the hospital’s entrance to protest the treating of Saeb Erekat, chanting ‘Israel shouldn’t save one who rewards the murdering of Jews.’

Arutz Sheva reported Lt. Col. (res.) Boaz Kukia, father of Nahal fighter Ron, who was killed in an Islamic attack in Arad and is now one of the leaders of the Bereaved Families’ Voting Forum, said: “Choose Life Forum representatives came to Hadassah Hospital to protest that a terrorist is being treated, who heads the Authority that supports terror by paying salaries to terrorists. 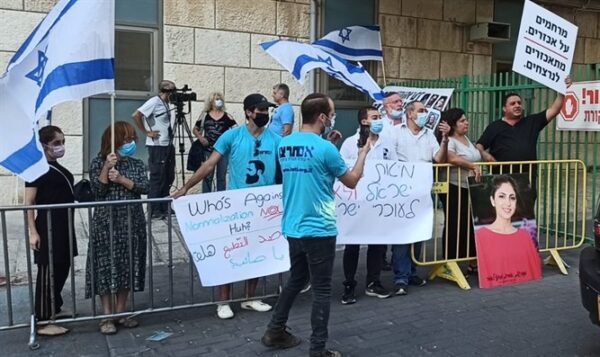 “The same terrorist takes up a bed and costs money at the expense of Israeli citizens while he and his boss encourage their murder. On this occasion, we call on the defense establishment to change the forgiving attitude to Palestinian terror, such as renewing the order Gantz has already frozen three times, prohibiting banks from transferring salaries to terrorists,” added Kukia.

Erekat is also one of the most senior advisers to Palestinian autocrat Mahmoud Abbas, and also served in top positions under Abbas’ predecessor, the PLO terrorist, Yasser Arafat. All three are considered kleptocrats that have shied from peace with Israel to maintain the status quo.

Im Tirtzu Director Matan Peleg said: “There’s no reason why the citizens of Israel need to pay for the VIP treatment of their enemies, especially a millionaire who is a symbol of corruption. It is absurd to be funding the enemies of Israel.”

On October 9, Jordan’s King Abdullah instructed his government to provide Erekat with any medical care he requires.

The Palestinian Authority made the urgent request to Israel to allow Erekat, who lives in Jericho, to be transferred to an Israeli hospital immediately, the PA sources reported.

The decision to transfer Erekat to an Israeli hospital came after his condition deteriorated over the past 24 hours, said the unnamed Palestinian source to the The Jerusalem Post.

Erekat was in stable condition and fully conscious while being taken to the hospital in an Israeli ambulance, Palestinian sources said. 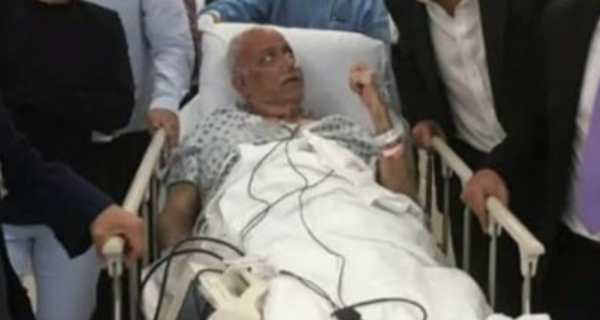 Israel Hayom reported Monday afternoon that Saeb Erekat’s family has been told they should come say goodbye after his condition became critical.