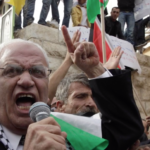 “Erekat had a quiet night but this morning his condition deteriorated and is now defined as critical, and due to respiratory distress he was intubated and sedated,” the hospital said in a statement. Continue Reading »

The Palestinian Authority, gov’t of West Bank autocrat Mahmoud Abbas is doubling down, forbidding Palestinians from receiving treatment in Israel because Jerusalem refuses to transfer nearly $138 million to the PA this year, the amount used to reward terrorists, a.k.a. ‘Pay to Slay’.

The PA’s explanation is as follows: Since Israel is refusing to transfer approximately $138 million to the PA this year to spend on salaries to terrorists, the PA will no longer permit Palestinians to travel to Israel for medical treatment, for which the PA has to pay. Continue Reading » 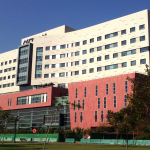 Following in the footsteps of other Abbas family members….as well as Hamas family members, PA chair’s brother, who lives in Qatar, also chooses to receive his medical treatment in an Israeli hospital.

Even as Palestinian Authority (PA) Chairman Mahmoud Abbas continues to attack Israel and incite terrorism, his brother Abu Luay chose to receive treatment at none other than an Israeli hospital.

Abu Luay, who lives in Qatar, came down with cancer. He decided specifically to come to the Tel Aviv hospital for treatment, where other family members of Abbas have been treated in the past. Continue Reading »

Despite all the rifts in the Israeli society, there is one place where we’re all equal: The hospital. 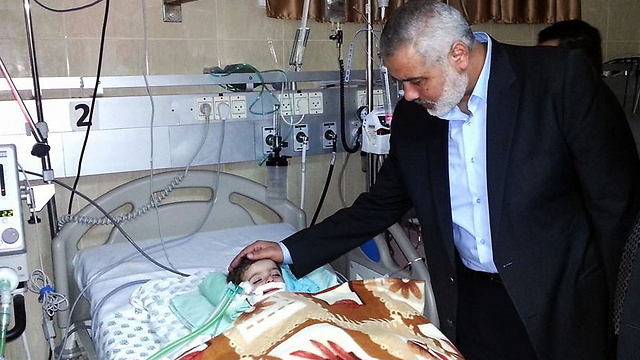 Hamas leader Ismail Haniyeh with his granddaughter, who was hospitalized at the Schneider Children’s Medical Center in 2013. (The study apparently does not apply to him or his ilk that became mega-millionaires perpetuating the Arab-Israel conflict.)

When it comes to sick children, the feeling of solidarity between the patients and their family members from all ends of society is even deeper, and they all feel the same concern for the sick child. Continue Reading »

The two couples are the proud parents of girls who, although not twins, clearly have a great deal in common: Their twin mothers were also born 20 minutes apart.

Niv and Ran Cohen, ba’alei-teshuva (newly religious) Israelis married twin sisters Leah and Rivki Fisch after meeting them on a visit to the Galilee community of Yavne’el, where a large community of Breslov hassidim live. Continue Reading »

Hamas’ leader, who calls for Israel’s destruction, had daughter in Tel Aviv Hospital

The daughter of Hamas leader Ismail Haniyeh, was admitted to a Tel Aviv hospital in October after suffering complications from routine procedure performed in Gaza.

A daughter of the leader of Hamas in Gaza was admitted to an Israeli hospital for emergency medical treatment this month after she suffered complications from a routine procedure, two sources familiar with the case said.

The Health Ministry has instructed all hospitals in Israel to hold training drills to make sure they are able to deal with patients who have the deadly virus.

In the wake of a meeting convened Sunday by Prime Minister Benjamin Netanyahu to discuss the Ebola outbreak in Africa — the second such meeting within a week — the Health Ministry has instructed Israeli hospitals in Israel to hold training drills to make sure they are ready to deal with patients who have or may have the deadly virus. Ministry officials will hold their own hospital drills and also carry out inspections to gauge the readiness of the country’s hospitals, starting toward the end of the month.

Female Syrian teenager who was injured and later treated in an Israeli hospital, claims returning to Syria would risk her life, and relatives in another Arabic country are prepared to take her in.

A Syrian teenager who has been hospitalized at the Rambam Medical Center in Haifa has filed a petition with the High Court of Justice in recent days requesting to not send her back to her country.

A Syrian patient in his hospital bed in Israel – Photo: Channel 10 screenshot

The girl claims in the appeal that returning to her homeland may risk her life, and that she had already lost several family members in the battles in which she was injured. Continue Reading »

Haniyeh’s granddaughter, 1 yr-old Aamal Haniyeh, was admitted to Petah Tikva hospital and later returned to Gaza after her condition could not be stabilized.

The granddaughter of Hamas Prime Minister Ismail Haniyeh was transferred on Sunday to Schneider Medical Center in Petah Tikva for treatment, sources in the Gaza Strip confirmed. She returned to the Gaza Strip after her condition worsened.

The sources said that the girl, Amal, was in serious condition after being diagnosed with acute infection in the digestive system.

Amal is the daughter of Haniyeh’s oldest son, Abdel Salam, who confirmed on his Facebook account that his one-year-old daughter had been transferred to Israel. Continue Reading »