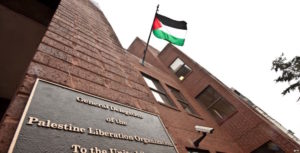 The State Department said the US step—the latest in a series targeting the Palestinians—came after a review of the office of the Palestine Liberation Organization centered on the fact that no “direct and meaningful negotiations with Israel” are underway despite previous warnings.

“To the contrary, PLO leadership has condemned a US peace plan they have not yet seen and refused to engage with the US government with respect to peace efforts and otherwise,” Nauert said in a statement.

“As such, and reflecting congressional concerns, the administration has decided that the PLO office in Washington will close at this point,” she stressed.

The Trump administration had told the Palestinians last November that closure could be expected unless they agreed to sit to down with the Israelis. The administration, however, has yet to release its own much-vaunted but largely unknown peace plan although it said it still intends to do so.

“The United States continues to believe that direct negotiations between the two parties are the only way forward,” Nauert continued.

“This action should not be exploited by those who seek to act as spoilers to distract from the imperative of reaching a peace agreement. We are not retreating from our efforts to achieve a lasting and comprehensive peace,” she emphasized.

She also said the closure decision was consistent with US concerns about Palestinian attempts to prompt an investigation of Israel by the International Criminal Court.

Earlier, US officials notified the Palestinians regarding the mission’s faith and its upcoming closure.

“We have been officially informed that the US administration will close our embassy in Washington as a punishment for continuing to work with the International Criminal Court against Israeli war crimes,” Palestinian official Saeb Erekat said.

“This is yet another affirmation of the Trump Administration’s policy to collectively punish the Palestinian people, including by cutting financial support for humanitarian services including health and education,” he said.

The Palestine Liberation Organization, commonly known as the PLO, formally represents all Palestinians. Although the US does not recognize Palestinian statehood, the PLO has maintained in Washington a general delegation office that facilitates Palestinian officials’ interactions with the US government.

The head of the PLO delegation to the US accused the Trump administration of “dismantling decades of US vision and engagement in Palestine.”

The move comes after several financial measures the Trump administration has taken toward the Palestinians.

Most recently his administration ended US funding for the United Nations agency that helps Palestinian refugees, slashing hundreds of millions of dollars in aid for projects in the West Bank and Gaza and cutting funding to hospitals in Jerusalem that serve Palestinians.

Trump also recognized Jerusalem as Israel’s capital and moved the US Embassy there, from Tel Aviv. Dozens of Palestinians were killed in protests that followed the move, and Palestinians have since rejected the US as a peace broker.

Although the Israelis and Palestinians are not engaged in active, direct negotiations, Trump’s administration has been working to mediate a peace deal that would end the Israeli-Palestinian conflict. Led by Jared Kushner, Trump’s son-in-law and a senior aide, White House officials have been preparing a peace proposal they intend to put forward at an unspecified time.

Trump has promised to pursue the “ultimate deal” between the Palestinians and Israel. However, such a deal is unlikely given Palestinian mistrust of his administration.