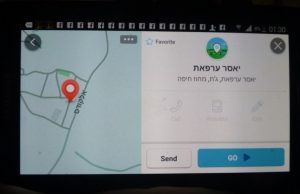 After learning that WAZE displayed a street named after the late PLO chief in the northern Arab town of Jatt, PM Netanyahu vowed to have the street renamed.

“I heard about the IDF veterans’ efforts to combat the decision to name a street in the Jatt local council after [former PLO leader] Yasser Arafat,” Prime Minister Benjamin Netanyahu wrote on his Facebook page on Saturday. “I spoke to Interior Minister Aryeh Deri about it, and he told me that his ministry never approved such a move. No street in the State of Israel shall be named after Arafat — we will take action to have the sign removed.

Jatt is an Arab local council in the Triangle area of the Haifa District. In 2015 it had a population of 11,164.

“The State of Israel needs to recalculate its course! According to [navigation app] Waze, it takes 39 minutes to get from my house in Ramat Gan to Yasser Arafat Street in Jatt. Have you heard of Yasser Arafat Street? Have you heard of [Palestinian nationalist leader and Nazi collaborator] Haj Amin al-Husseini Street? In the name of ‘proper representation,’ streets have been named after mega-terrorists who spilled Jewish blood as if it were water and whose ideologies still feed into Palestinian nationality,” she wrote.

“Unless we take the right steps now, we are destined to lose our way and end up on Ismail Haniyeh Street or Nasrallah Street,” she added, referring to a top Hamas official and the Hezbollah leader.

The naming of Yasser Arafat Street was first reported on the Walla news site. According to the report, the street was discovered through the use of the Waze navigation app, and that IDF veterans have approached the interior minister demanding that the name of the street be changed.