Primary race to be tight, as polls show Likud getting 31 seats, but party regulations only allow 19 of current 27 MKs to run again; party spokeswoman says the primary will take place in early to mid-June.

The Likud convention, where Prime Minister Binyamin Netanyahu plans to officially announce an early election for September 4, is set to begin on Sunday night in Tel Aviv. 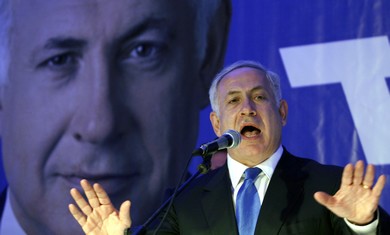 The convention is expected to be heated, as its members will decide in the coming weeks how the Likud will choose its candidates for the next Knesset.

A party spokeswoman said the primary would take place in early to mid-June.

However, the real conflict will be about how the list is organized. Under the current rules, the candidates in the top 19 spots are elected nationally while the rest are chosen regionally. Only people who are not MKs may run for the regional slots.

Should the rules remain as they are, a tough race is expected for the eight MKs currently serving in regional positions.

Likud insiders say the prime minister will choose one of two options for changing primary regulations, to keep the internal politics from becoming too vicious.

One is to increase the number of nationally elected MKs. Another is to allow veteran MKs to vie for the regional slots.

The June primary is the focus of the convention, as elections for its president and the party’s institutions were canceled, in favor of showing a united front ahead of the general election.

Netanyahu planned to run for convention president, and was challenged by Government Services Minister Michael Eitan and MK Danny Danon; however, Welfare and Social Services Minister Moshe Kahlon will remain in the role, as the vote was canceled.

Also on Sunday, protest groups Camp Sucker and Common Denominator will set up camp outside the Likud convention, calling for Netanyahu to keep his promise to their leaders to pass a law requiring every citizen to enlist in the IDF or perform civilian service.

“We call on the prime minister to prove to all of Israel that that his credibility problem no longer exists, and there is no way he will not keep his promise,” protest leaders Idan Miller and Boaz Nol said on Saturday. They called on Netanyahu to ensure that such a bill passes at least its first reading before the Knesset is dissolved this week.