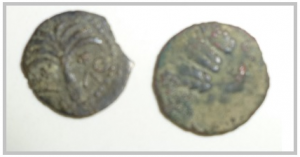 Items dating from Hasmonean, Bar Kokhba, Second Temple, Assyrian, Roman and other periods are seized, worth hundreds of thousands of dollars.
• Suspect, accused of illegal commerce, says he bought the artifacts for his own private collection.

Hundreds of archaeological artifacts, including items believed to be from the Bar Kokhba, Hasmonean, Second Temple, Assyrian, Roman and other periods, were confiscated early Tuesday in a joint raid by the police and Israel Defense Forces on a home belonging to a Palestinian man in the village of Huwara near Nablus.

The overnight raid, carried out by the Samaria and Shai District police departments and the IDF’s Coordinator of Government Activities in the Territories unit, came on the heels of intelligence information about an unusual, and illegal, inventory the man was keeping in the home.

Investigators from COGAT’s archaeology unit assessed the artifacts’ ages. Initial appraisals valued the artifacts as worth at least in the hundreds of thousands of dollars.

The man, who is around 50 years old, is suspected of selling the antiquities, which is against the law. A handgun and makeshift rifle were also found in his home.

The suspect told investigators he had purchased the antiquities for his own private collection. Police said the investigation was ongoing.

Samaria District police commander Yair Hetzroni said: “The police see the confiscation [of items] and arrest of those who buy and sell antiquities very important. The [Samaria District] department carries out broad operations, in conjunction with antiquities authorities and COGAT, to catch those suspects and bring them to justice.”