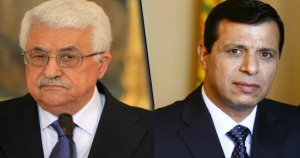 Coming to the defense of the latest expelled Palestinian Legislative Council leader, Mohammed Dahlan told the BBC on Sunday that no one has the authority to oust Fatah members from the party. “He who thinks he can expel members from Fatah should know that he does not possess such authority,” Dahlan said.

Tummaleh was elected to the Palestinian Legislative Council in 2006 to represent Ramallah and its twin city, El-Bireh.

The memo, which included Abbas’s signature, did not detail the reason for Tummaleh’s expulsion, but stated that the “Tajannuh Committee,” which was established in 2011 to investigate members of Fatah allied with Abbas’s rival Muhammad Dahlan, recommended it.

Some analysts have suggested that Abbas expelled Tummaleh for his role in organizing a meeting on Saturday of Fatah leaders suspected of having ties with Dahlan in the Amari refugee camp.

Tummaleh and other Fatah members present at the meeting called on the Fatah leadership to unify Fatah and reinstate ousted members such as Dahlan before an upcoming conference in November to elect a new Fatah leadership.

In an official statement, Munir Jaghoub, a Fatah spokesman, did not specifically refer to the decision to oust Tummaleh, but said “the conspirators need to learn lessons from the ousted members.”

Tummaleh initially did not react to the news of his ouster, but later rejected it in a Facebook post on Sunday night. “He who thinks he can erase me from Fatah and my history of struggle with the stroke of a pen is delusional… Thus, in my perspective, this decision does not merit the ink used to write it,” wrote Tummaleh, adding that his ouster “is a true expression of the policy of suppressing free speech, which some leaders in Fatah are practicing.”

Mohammed Dahlan during an interview with The Associated Press – Photo: Majdi Mohammed

Dahlan told the BBC on Sunday that no one has the authority to oust Fatah members from the party. “He who thinks he can expel members from Fatah should know that he does not possess such authority,” Dahlan said.

The Arab Quartet, comprised of Jordan, Egypt, the UAE, and Saudi Arabia, has reportedly pressured Abbas to allow the return of Dahlan and his allies to Fatah. However, Abbas seemingly has rebuffed the pressure, saying “no one will dictate a position to us” and “we are the decision makers.”