Presidential error at the UN, politicly motivated in anti-Israel bias 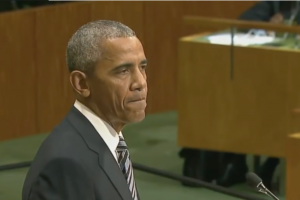 President Obama could have said ‘West Bank’, but calling Judea & Samaria “Palestinian lands,” in his UNGA address “prejudges the issue of sovereignty & borders and is not accordance with int’l law” or in accordance with the Oslo Accords, to whom the United States is a signatory.

Despite Barak Obama’s speech last week at the UN being endlessly analyzed, there has been no meaningful reference to the way in which the president referred to Judea and Samaria. The president remarked parenthetically that Judea and Samaria are “Palestinian lands”. Only the Zionist Organization of America (ZOA) has responded and protested the inaccuracy in Obama’s words.

Obama said that “Surely, Israelis and Palestinians will be better off if Palestinians reject incitement and recognize the legitimacy of Israel, but Israel recognizes that it cannot permanently occupy and settle Palestinian land”

The ZOA remarked that the use of the term Palestinian land “prejudges the issue of sovereignty and borders and is not accordance with international law, which designates Judea/Samaria as unallocated territory, without a recognized sovereign.”

Moreover, they added that “the President’s use of this term is political in nature, as it automatically and unjustly designates the biblical, religious, and historical heartland of the Jewish people for millennia, before the Arab conquest of the region in the seventh century, as belonging to Palestinian Arabs.

“It is well-known that there are conflicting claims to the land, but it is also important to note that Israel has a better claim in law than any other party.

“The territory of the West Bank was earmarked for Jewish settlement in 1920 at the San Remo Conference. This decision, enshrined in the League of Nations Mandate for Palestine entrusted to Britain that shortly followed, has never been superseded by an internationally binding agreement. To the contrary, it was reaffirmed by Article 80 of the UN Charter.

“The Arab states rejected the 1947 UN General Assembly partition resolution that called for an Arab and a Jewish state to be established in the territory of the British Mandate. As a result, no agreement on statehood and borders was ever reached. Jordan, which illegally invaded and annexed the territory from 1948 to 1967, formally relinquished its claim to the territory in 1988.

“In the absence of a peace settlement, Judea/Samaria is unallocated territory under international law, not the sovereign territory of another state that Israel ‘occupies.’

“As a result, Israel is not ‘occupying and settling Palestinian lands’; Israel permits Israelis to live, and build homes and communities in this territory to which it has a strong legal claim, having captured the territory from Jordan in 1967 in a war of self-defense.”

Over the course of the past 100 years, Judea and Samaria have been ruled by Ottomans, the British mandate, Jordan and Israel but has never been under Palestinian control.

The ZOA added that the Palestinian authority was founded in 1993 but did not gain control over the areas with Jewish communities and “the Oslo agreements do not prohibit Israeli residence and construction in these territories; to the contrary, the Oslo agreements provide for Israeli and Palestinian building in zones under their respective controls.

“Oslo also lists this as a final status issue, to be negotiated by the parties themselves, and Israel is entitled to assert its right for its citizens to live and build in these territories until such time as a peace settlement is reached.”