Presidential error at the UN, politicly motivated in anti-Israel bias

President Obama could have said ‘West Bank’, but calling Judea & Samaria “Palestinian lands,” in his UNGA address “prejudges the issue of sovereignty & borders and is not accordance with int’l law” or in accordance with the Oslo Accords, to whom the United States is a signatory.

Despite Barak Obama’s speech last week at the UN being endlessly analyzed, there has been no meaningful reference to the way in which the president referred to Judea and Samaria. The president remarked parenthetically that Judea and Samaria are “Palestinian lands”. Only the Zionist Organization of America (ZOA) has responded and protested the inaccuracy in Obama’s words. Continue Reading »

Tehran gives no indication that they will suspend all uranium enrichment and still the White House sees “level of seriousness and substance that we had not seen before.”

By CAROLINE B. GLICK
Speaking to the Knesset’s Foreign Affairs and Defense Committee on Wednesday, Strategic Affairs Minister Yuval Steinitz explained Israel’s concerns about the nuclear negotiations with Iran in Geneva. “We’re worried Geneva 2013 will end up like Munich 1938.” 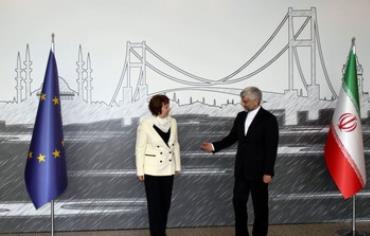 Well, the time for worrying has passed. The statements from the Obama administration and the EU following the closing of the first round of talks all made clear that Geneva 2013 is Munich 1938.

Obama: Commitment to Engage Iran in Return for Peace Talks

U.S. President Obama promised Israeli PM Netanyahu to take direct action against Iran “within months,” but did not elaborate on details.

The source said, however, that Obama did not reach a specific agreement with Netanyahu, but gave only a general commitment. The source added that it was not clear if the commitment was given in exchange for the very fact that Israel-PA negotiations are being held, or if it is conditional on their success. Continue Reading »