After credible threats to target Christians & their holy sites by Muslim extremists within the Palestinian territories, Abbas’ PA decided to cancel the Christmas celebrations, which, as many were led to believe, had nothing to do with Israel or the recent violence against Jews.

This was not a happy Christmas for our Palestinian brothers in the West Bank who happen to be Christian. The Palestinian Christians have now become a tiny minority in Bethlehem. This year, they were just lucky that Christmas passed without a major terrorist attack or serious outbreaks of violence. 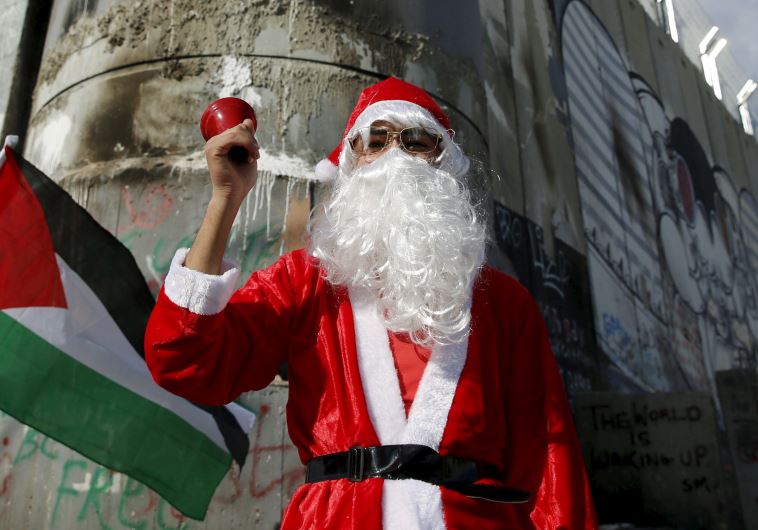 A Palestinian protester wearing Santa Claus costume stands in front of a section of the Israeli security barrier in the West Bank city of Bethlehem, December 18, 2015. – Photo: REUTERS

On Christmas day, Muslim Palestinians hurled stones at the car taking the Latin Patriarch of Jerusalem, Fouad Twal, to Bethlehem. Twal, head of the Catholic Church in the Holy Land, was fortunately not hurt in the attack. The stone-throwers, local residents said, were from a refugee camp near Bethlehem. They had apparently said they were opposed to holding any form of celebrations in Bethlehem — on the pretext that there is no reason to celebrate while Palestinians are being killed by Israelis — who, by the way, have merely been trying to stop Palestinians from killing them.

There is no guarantee, however, that next year’s Christmas in Bethlehem — and other Palestinian cities and villages — will be safe for our Christian brothers. It would not be surprising if next year the Palestinian Authority (PA) decides to cancel Christmas celebrations for “security reasons.”

The Palestinian Authority leadership, just before Christmas, announced that celebrations this year would be limited to religious festivities, because of the ongoing wave of terrorism against Israelis — attacks that some of our leaders are calling the “Al-Quds Intifada” or the “popular uprising. Our leaders also told the Christian population that there was no reason to celebrate while Palestinians were being shot and killed by Israelis — meaning those Palestinians killed while stabbing Jews with knives or running Jews down with cars.

On the eve of Christmas, however, it became clear that the real reason behind the PA’s decision to cancel public celebrations had nothing to do with Israel or the “intifada.” The decision, it turned out, came after threats by Muslim extremists to target Christians and their holy sites. Christian residents of Bethlehem and Ramallah said they received threats and demands to cancel celebrations from various Islamic groups. Their threats come in the context of ongoing Islamist persecution of Christians not only in the Palestinian territories, but also in other Arab countries, such as Iraq, Syria, Libya and Egypt.

It is this campaign of intimidation against Palestinian Christians that prompted the Palestinian Authority security forces to arrest scores of Islamists in the West Bank ahead of Christmas.

One report, which said that Palestinian security forces in the West Bank had rounded up 16 men affiliated with Islamic State and other jihadi groups, was truly startling. Our leaders in Ramallah have long been denying the presence of Islamic State followers in the West Bank. These men in Ramallah are always saying that such claims are “rumors” spread by Israel to create confusion and anarchy among Palestinians. The clampdown on Islamists in the West Bank shows that our leaders have been lying to us and to the rest of the world, as well.

It also shows that, contrary to what the Palestinian leadership has been saying, Israel and the “intifada” had nothing to do with the decision to cancel Christmas celebrations. Palestinian President Mahmoud Abbas, in his Christmas message, chose to ignore the Islamist threats against Palestinian Christians. Instead, he put all the blame on “extremist Israeli settlers,” whom he accused of “attacking churches and mosques.”

Apparently, President Abbas and our leaders are living on a different planet where people do not hear of the plight of Christians in our neighboring Arab countries. There is, it seems, on Planet Ramallah, no campaign of intimidation and terrorism waged by Palestinian Islamists against our Christian brothers in the West Bank and Gaza Strip.

Even before the attack on Latin Patriarch Fouad Twal, Palestinian Muslims had set fire to a Christmas tree in the Christian village of Al-Zababdeh, in the northern West Bank. Palestinian security forces arrested two Palestinian Muslims belonging to a radical Islamist group, in connection with the arson.

On top of that, in a cynical exploitation of a Christian symbol to promote violence and hate, Palestinian Muslims have been disguising themselves in Santa Claus costumes while throwing stones at Israeli soldiers in the West Bank. It is hard to think of anything more saddening than to watch a Santa Claus engage in violence instead of handing out gifts and candies to little children.

President Abbas, however, does not appear to consider this an insult to Christians and their faith. It seems the Palestinian agitators dressed in Santa Claus outfits were hoping to show the world that Israeli soldiers were deliberately attacking Christians and their symbols. It is not yet clear if there was any disappointment that the Israeli soldiers were apparently not the least bit interested in taking the bait.

For this condition, the mainstream Western media is largely to blame. It has long been complicit, unethically and immorally, in helping Palestinians spread their message of anti-Israeli hate. The Western journalists and photographers covering the violence knew perfectly well that the men wearing Santa Claus outfits and throwing stones while yelling “Allahu Akbar” were in fact Muslims, not Christians, but not one of them chose to report this important fact.

Unfortunately for our Palestinian Christian brothers, a vulnerable minority, this was a somber Christmas in the West Bank. What seemed to many of us most painful on this holiday was not the wave of terrorism against Jews, or the “occupation,” but the seriously growing threat of radical Islam.

The Christians in the West Bank and Gaza Strip are no different from their brothers in Iraq, Syria, Egypt and Libya, who face a ruthless campaign of persecution and ethnic cleansing at the hands of Islamic State and other Islamist groups. Yet, that is a circumstance our leaders in Ramallah do not want the world to know. They want the world to blame only Israel for the predicament of the Christians in the Palestinian territories and the Middle East.

If, in the media and the international community, this strategy of turning a blind eye to the Muslim persecution of Christians continues, next year’s Christmas in Bethlehem is sure to be an even less happy one.

Bassam Tawil is a scholar based in the Middle East.