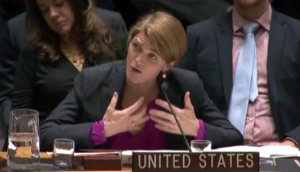 The UN Security Council’s Resolution 2334, which was adopted on Friday, may not have immediate practical ramifications, but it could open the door to lawsuits against Israel at the International Criminal Court (ICC) in The Hague and for sanctions to be imposed on Israel—both by the UN and by individual countries.

Of the 15 members of the UN Security Council, 14 voted in favor of the resolution against Israel’s settlement construction, which was raised by Malaysia, New Zealand, Venezuela and Senegal after Egypt rescinded it as a result of Israeli pressure.

The United States chose to abstain from the vote, and in an unusual move—the first in Barack Obama’s presidency—Washington did not veto a resolution against Israel.

The adoption of the resolution was met with applause by the convened diplomats at the UN Security Council.

The resolution makes Israeli citizens that are involved in the settlement enterprise in the West Bank vulnerable to lawsuits in courts all over the world.

Jerusalem is also worried that the resolution opens the door for lawsuits against Israeli officials at the ICC: government ministers and senior IDF officers who make decisions about construction in the settlements, the demolition of Palestinian homes, or the expropriation of lands could be accused of war crimes under the Geneva Convention.

The resolution can also lead to the creation of mechanisms to monitor and report Israeli actions, which could lead to sanctions being imposed against it.

The resolution’s wording can also be seen as a victory to the BDS Movement, as it opens the door for boycotts of goods produced in the Jewish settlements in the West Bank.

The resolution includes an article requiring the UN secretary-general to report to the Security Council every three months regarding its implementation. This will lead to continued pressure on Israel, putting it in a constant defensive position, similar to South Africa during the apartheid regime.

Article 5 of the resolution calls to create a distinction between the State of Israel and the settlements built on lands captured in the West Bank and in east Jerusalem during the 1967 Six-Day War.

This article calls on the international community not to aid those settlements and allows for countries and organizations to boycott the settlement enterprise—either directly or indirectly.

Officials in Jerusalem are worried such a call would encourage the European Union to make its policy of labeling settlement products into law and call for a boycott these products.

Such a move would lead banks, gas stations, HMOs, retailers, high-tech companies and others to close their branches beyond Green Line to avoid being included in the “blacklist” of companies doing business in the settlements and consequently being boycotted as a result.

Officials in Jerusalem are also worried that other nations in the world will follow in the footsteps of the European Union—even if not by boycotting the settlements, then at least by labeling settlement products.

Nevertheless, the resolution cannot be applied retroactively and has no immediate practical consequences. Since it was adopted under Chapter 6 of the United Nations Charter, it cannot be forced on Israel. Only resolutions passed under Chapter 7 can be imposed.

Theoretically, this will allow Israel to mitigate the damages caused by resolution, mostly with the help of US President-elect Donald Trump, who will also be able to veto future resolutions.

Prime Minister Benjamin Netanyahu’s office has already announced it would work in cooperation with Trump on the matter, while Trump himself tweeted: “As to the UN, things will be different after Jan. 20th.”

One of the existing possibilities is for Trump to threaten to cut the UN’s funding if it tries to impose sanctions on Israel.

But while the damage from the resolution might be mitigated, it still limits the Israeli government in several ways.

If, for example, the Israeli government approves construction in the settlements and in east Jerusalem, it risks being accused of violating the resolution, which is based on the Fourth Geneva Convention that prohibits an occupier to transfer parts of its own civilian population into occupied territory and views such an act as a war crime.

In addition, if the Israeli government decides to annex the West Bank or even just Area C, such a move can prompt some in the international community to demand that a new resolution is passed at the UN Security Council—this time under Chapter 7, which empowers the UN to impose a resolution. Even so, it is likely that Trump will veto such an attempt.

The Palestinians, meanwhile, can now choose to seek membership at the UN Security Council. Last year, the Palestinians raised their flag at the UN, but failed when they tried to join.