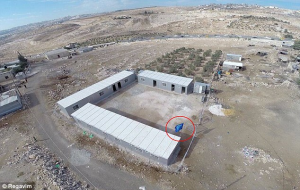 This is not the first time Regavim has turned to the Supreme Court over illegal EU-funded construction, though the current appeal notes that the buildings are located on private Arab land.

“Most of the land in Hizme was registered before the Six Day War,” explained Oved Arad, the director of Regavim’s land department. “The land doesn’t belong to Bedouins or to the European Union, which built about 15 illegal structures.”

Early last year, Regavim asked the Civil Administration to destroy 13 buildings at the site, but the Supreme Court had released a temporary injunction against enforcing the law, following an appeal by the residents.

In February 2015, the Court rejected the residents’ request and withdrew its injunction, thus allowing enforcement agencies to do their work. After repeated inquiries from Regavim were left unanswered, the group finally now turned to the Court.

The latest motion emphasizes that, aside from the fact that the buildings were set up without permits and in violation of the law, they are placed on private land belonging to local Palestinians – which should make the enforcement agencies to view the issue as a top priority.

“The non-enforcement policy encourages the Palestinian Authority head’s stated plan to expand the Bedouin outposts in the area,” note the appellants. “Their goal is to strengthen the PA’s hold on the areas under full Israeli control and to grab strategically important land next to major transportation arteries. Through this, they want to tie the State of Israel’s hands in future negotiations.”