Israeli Arab who illegally entered Syria, seeking to fight and die a Shaheed, was ‘captured and tortured by Assad security forces’ to gain intel on Israel, before returning home in a poor state of health from his ‘interrogations’.

Security forces arrest resident of Kalansuwa, 20, upon his return to Israel.
Islamist fighters 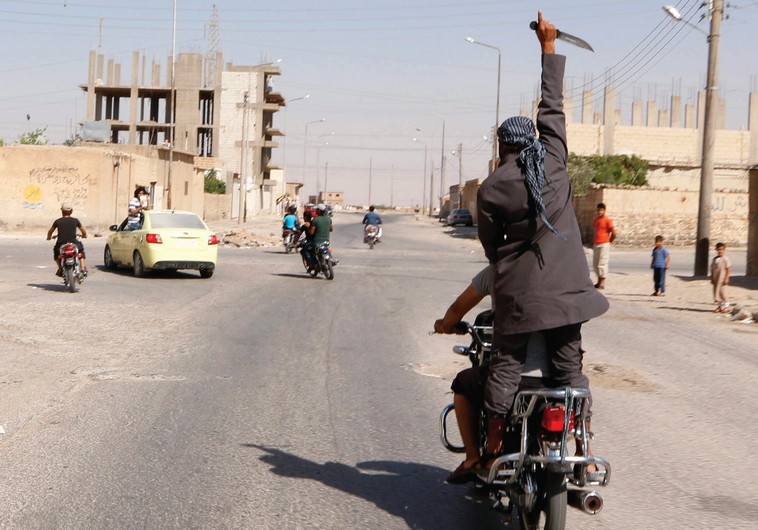 A man holds up a knife as he celebrates the conquest of a town in Syria by Islamist fighters. – Photo: REUTERS

Security forces arrested an Israeli Arab in December who had returned to the country after attempting to join a jihadist group in Syria, but instead was captured by Assad regime security forces and tortured, the Shin Bet (Israel Security Agency) said on Monday.

The Shin Bet named Yousef Yaakub Nasrallah, 20, of Kalansuwa, in central Israel, as the suspect. Nasrallah was arrested at the Jordan River crossing (also known as the Sheikh Hussein crossing).

During subsequent questioning, he confessed to traveling to Syria via Jordan on April 19.

Nasrallah was arrested by Syrian regime security forces hours after crossing into Syria and underwent multiple interrogations, during which he was asked to pass on information on Israeli security installations.

Nasrallah suffered extreme torture during the interrogations and returned to Israel after his release in a poor state of health, the Shin Bet said, stressing that it only began questioning him after receiving authorization from doctors, who carried out thorough medical examinations.

They removed a gag order on the case which had been in place.

Nasrallah said he had hoped to die while fighting the Syrian army, in order to achieve martyrdom, the indictment stated.

It added that Nasrallah had crossed into Syria from Jordan, taking a Jordanian cab to the Jordan-Syria border.

Further, the indictment said that Jordanian soldiers tried to stop him from crossing the border, including firing on him, but that he escaped them and crossed the border.

Nasrallah was asked for details about an Israeli military base on Route 2, Israeli friends, family members in the IDF and the Israel-Palestinian areas crossings and provided information on the issues, according to the indictment.

Syria turned Nasrallah over to the Palestinian embassy in Damascus on December 12, from which he flew to Jordan, the indictment stated.

“The phenomenon of Arab Israelis traveling to Syria is most dangerous, as the Syrian arena is filled with activity by elements hostile to the State of Israel, particularly global jihad operatives,” the Shin Bet said in a statement.

“Arab Israelis who head out to this arena undergo military training and are exposed to an extreme jihadi ideology. There is concern that they will be exploited by terrorist elements in Syria to carry out attacks against the State of Israel and act as a source of information on targets in Israel,” it added.