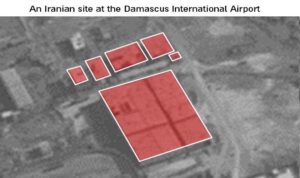 It said three non-Syrian loyalist fighters were killed by a missile blast between the suburb of Aqraba and the nearby Sayyida Zeinab neighborhood, home to a shrine revered by Shiite Muslims.

It did not specify their nationality but said they were likely Iranian.

It said one missile came down in Aqraba, southeast of Damascus.

Israel has not publicly claimed responsibility for the raids.

An Israeli army spokeswoman contacted by AFP said Israel does not comment on reports in foreign media.

Since the beginning of the Syrian conflict in 2011, Israel has conducted hundreds of strikes in Syria against Iranian targets and pro-Tehran militias allied with the regime of President Bashar al-Assad.

An Israeli strike on November 20, killed 23 pro-regime fighters including 16 foreigners, along with two civilians, according to the Observatory.

In July, six Iranians and three pro-regime Syrian fighters were killed in reported Israeli missile strikes in the southern provinces of Daraa and Quneitra, according to the Observatory.

A month later, the Israeli army carried out a strike in Aqraba, killing two
Hezbollah terrorists and one Iranian soldier.

The war in Syria has killed more than 370,000 people and displaced millions since it began eight years ago.