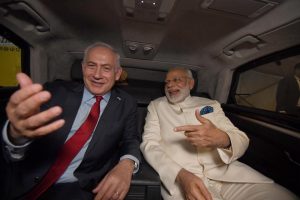 According to the Hindustan Times, the Indian military is very keen on purchasing the missile from Rafael Advanced Defense Systems. The Indian Defense Ministry recently scrapped the deal in favor of a locally made missile.

“India will purchase Spike antitank guided missiles from Israel through the so-called government-to-government route because the military wants the proven weapon, and the Defense Research and Development Organization has no objections to the deal, as long as it does not involve transfer of technology,” the paper reported on Tuesday.

According to the report, the deal was originally dropped in favor of a locally made Nag missile. “Spike is a battle-proven missile which has much longer range and comparatively light in weight when compared to Nag,” the paper reported, explaining why the Indian Army prefers it.

A Rafael source would neither confirm nor deny the report, saying only that Rafael has not “heard anything official.”

Gilad Cohen, the Foreign Ministry’s deputy director-general for Asia and the Pacific, would not discuss the Spike deal or weapons deals between India and Israel, during a briefing he gave Wednesday previewing Netanyahu’s visit.

According to the Stockholm International Peace Research Institute, which charts arms sales around the world, Israel sold $599m. worth of arms to India in 2016, making it India’s second-largest weapons supplier after Russia, which sold India $1.6 billion in arms that year.

Nonmilitary trade between the two countries reached $4.2b. in 2016, and Netanyahu’s visit to India will focus on how to substantially increase that number.

A trip to the Taj Mahal, a “road show” in an open jeep past street-side performances, roads expected to be lined with people in Prime Minister Narendra Modi’s home state of Gujarat, and an evening with the Bollywood glitterati in Mumbai are on Netanyahu’s agenda for the visit, which will begin on Sunday.

Netanyahu’s visit, the first by an Israeli prime minister to the subcontinent since former prime minister Ariel Sharon became the first-ever Israeli premier to visit the country in 2003, is a reciprocal visit, corresponding to Modi’s visit to Israel in the summer.

That visit was marked by a great deal of face-to-face time between the two leaders, with Netanyahu accompanying Modi throughout most of his three-day visit, an honor usually reserved for US presidents.

Modi, the leader of a country of 1.3 billion people, will act in a similar fashion toward Netanyahu, whose country has 8.5 million people, spending much of the next week with him.

According to Cohen, the two will meet for dinner soon after Netanyahu’s arrival on Sunday in New Delhi; for bilateral talks in the capital on Monday morning; at a think-tank event there on Tuesday; and will spend much of Wednesday together in Gujarat.

There, Netanyahu will be feted, as was Japan’s Prime Minister Shinzo Abe in September, with a “road show” in Ahmadabad. This “road show” is scheduled to be an 8-kilometer drive from the airport to the Sabarmati Ashram, where Mahatma Gandhi lived from 1917 to 1930, and past numerous stations where there will be traditional, local performances.

On Thursday, Netanyahu is scheduled to travel to Mumbai, where he will hold meetings with business leaders and try to promote Israel as a place to make movies during an event with Bollywood actors, directors and producers.

Birthright participants from India dancing the night away in Jerusalem. – Credit: Adam Saville

In Mumbai he will also take part in two memorial ceremonies, marking the terrorist attacks in 2008 that killed 164 people.

One of the ceremonies will take place at the Taj Mahal Palace Hotel, one of the sites of the attacks, and the other at the local Chabad House. There he will be joined by Moshe Holtzberg, 11, who as a toddler survived the attack that took the lives of both of his parents. The boy will be accompanied by his grandparents and the Indian nanny who saved his life and who now lives – as he does – in Israel.