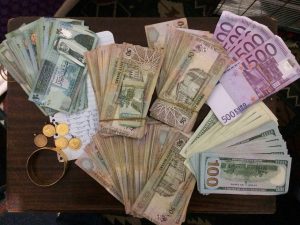 The new report examined 10 organizations affiliated with the PFLP, which received funding from both the European Union and European countries.

The PFLP has been designated a terrorist organization by the United States, European Union, Canada and Israel.

One of the groups to receive funding is the Union of Health Work Committees, whose founder, Rabah Muhanna, is a member of the PFLP’s political bureau and head of the group’s branch in the Gaza Strip.

According to the report, the UHWC has received over 350,000 euros ($380,000) from the European Commission between 2014 and 2016, on top of substantial funds donated by European governments and various European humanitarian groups.

The European Union is also a key contributor to the Gaza-based Palestinian Center for Human Rights, whose founder, Raji Sourani, was convicted in 1979 of being a member of the PFLP.

In 2012, Sourani was denied a visa to the United States over his dubious record.

During the same period of time, the United Nations Office for the Coordination of the Humanitarian Affairs donated $557,000 to the group.

The report further identifies a number of well-known funds, including funds operated by liberal billionaire George Soros’ companies, as donating to nongovernmental organizations linked to the PFLP.

“The clear affiliation between these NGOs and the Popular Front for the Liberation of Palestine requires immediate attention and concrete action from European donors, to ensure that funds do not reach groups affiliated with the PFLP or with other terrorist organizations,” NGO Monitor concluded.

“The current funding should be suspended until such time as the donors conduct an independent audit of the processes that have allowed funding for these organizations.”

The report also urged Israeli officials to “take the financial ties between the Popular Front for the Liberation of Palestine and European bodies very seriously.”