Report: Hamas working hard to get Corbyn elected as PM of UK 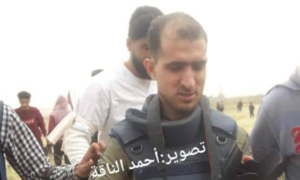 The “We support Jeremy Corbyn” Facebook page with about 72,000 followers is operated by Hamas operatives and supporters from Gaza to London, including one Walid Abu Rouk, a resident of Khan Younis.

The Hamas terrorist organization has been working to help Jeremy Corbyn, the leader of the British Labour party, win Thursday’s general election in the United Kingdom, the Israel-based Tazpit Press Service reported on Monday.

Hezbollah flag behind Jeremy Corbyn at a protest in 2012. – Photo by Samuel Hardy

According to TPS, one of the largest and most important of the Corbyn support organizations across the world – the “We support Jeremy Corbyn” Facebook page, with some 72,000 followers – is operated by Hamas operatives in Gaza and London.

The page has been managed for over two years by Walid Abu Rouk, a resident of Khan Younis in the Gaza Strip. In June 2017, Labour activists decided to add Abu Rouk as a manager to the page, declaring him “our man in Gaza,” TPS reported.

Abu Rouk, the report continued, “Is a central link within the hidden relationship that serves Hamas in its political relations with Labour, and that may be what prompted Labour activists to appoint him as the director of the Facebook page from the Gaza Strip.”

Independent journalist @WalidMahmodRouk was filming live when a protester was shot in the head by an Israeli sniper.
It’s been four months since tens of thousands in Gaza launched the #GreatReturnMarch to protest the siege of Gaza, for freedom, and for the right of return. #Gaza pic.twitter.com/u9uoAb53UG

A source in Gaza told TPS that “Abu Rouk serves Hamas’ information campaign and is guided” by the terrorist organization “because of his command of the English language.”

Abu Rouk said in a phone call with TPS that he writes for Al-Jazeera, the Qatari news network affiliated with the Muslim Brotherhood, for the PALESTINE 24 website and for the Middle East Eye website – all affiliated with Hamas.

He also writes for the London-based Memo Monitor newspaper, which is considered one of the UK’s Muslim Brotherhood’s media sites. Memo Monitor writers routinely express support for Corbyn and Labour, and the party receives particularly sympathetic coverage by the outlet.

Abu Rouk, TPS reported, also advocates for the boycott of the Israeli media and is an active supporter of several BDS organizations. He promotes the British organization Viva Palestina, which was founded by former British Labour lawmaker George Galloway, who was expelled from the party over anti-Semitism.

According to TPS, Viva Palestina, which is registered in the UK, operates under the instructions of senior Hamas official Zaher Birawi, who has also been identified by Israel’s defense establishment as one of the top Hamas representatives in the United Kingdom. A source in the Gaza Strip told TPS that Birawi is responsible for all Hamas-UK relations and they call him the holder of the “Corbyn-Hamas file.”

On Monday, despite Israel officially not taking a stance in the UK’s general election, Blue and White co-leader MK Yair Lapid said Israel had to actively ensure that Corbyn will not enter 10 Downing St.

“Usually, you’re not supposed to interfere with the election in other countries, but in this case I’m going to make an exception. Jeremy Corbyn is an anti-Semite,” Lapid said.

Corbyn attended a conference with Hamas terrorists in Doha in 2012.

Hamas political bureau chief Khaled Mashaal, who is on the UK’s sanction list, was just one of the terrorist officials in attendance at the Qatar conference.

A spokesman for Corbyn told The Telegraph at the time that the Labour leader “has a long and principled record of solidarity with the Palestinian people and engaging with actors in the conflict to support peace and justice in the Middle East. That is the right thing to do.”

With memorial wreath in his hand, Jeremy Corbyn stands feet from the graves of terror leaders linked to the Munich Massacre (left), and then photographed praying along with PLO and Fatah terrorists in Tunisia.(right) – Images from the Palestinian Embassy Website archive in Tunisia.

In 2014, Corbyn attended a memorial ceremony for the Palestinian terrorists who murdered 11 Israelis at the 1972 Munich Olympic Games.