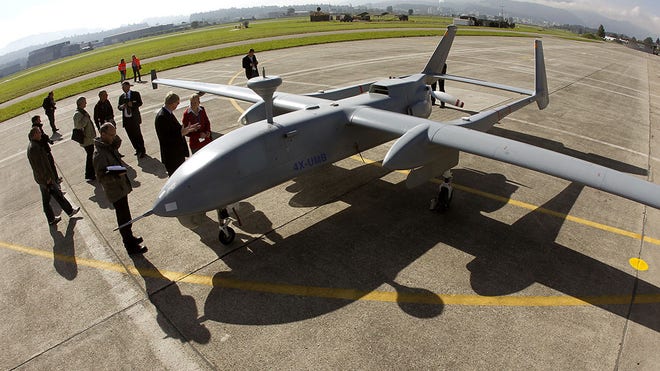 The numbers speak for themselves, but very little credit has so far been given by foreign governments, NGOs, and the international media for the care taken by the Israeli military to avoid collateral damage during its recent vicious engagement with Hamas and Islamic Jihad fighters.

“In cases where there are people inside a house or building we never strike the target without prior warning.”   – ‘Major G,’ Israeli drone expert

‘Major G,’ the chief instructing officer of the Israeli UAV (Drone) School, spoke exclusively to Foxnews.com on condition of anonymity about Israel’s hi-tech drone capabilities, his military’s terms of engaging the enemy, and aspects of his direct role in the recent Gaza conflict in which Israel strongly contends most non-combatant deaths were as a result of Palestinian civilians being routinely used as human shields by Hamas.

“Drones (UAVs – Unmanned Aerial Vehicles), play a very important and essential role in the protection of the State of Israel,” ‘Major G’ explained. “The great advantage of the drone is the ability to stay in the air for up to 40 hours at a time above the relevant area to perform ISR missions – Intelligence, Surveillance and Reconnaissance.”

Once a drone identifies a target, its operator is then responsible for setting in motion a sometimes dizzyingly fast chain of events that may result in a missile strike taking place.

“Using commercial apertures and video cameras, we have the ability to work with both daytime and night time infrared images. My Heron1 drone does only ISR, but I have the ability to designate a target to another aircraft. This capability is very important because I am able to stay above and investigate the target for a long time, clear it of uninvolved civilians, and only when there is a clear path of fire do I call for the F16 or Apache helicopter,” said ‘Major G.’

Critics of Israel’s actions invariably suggest a lack of concern about collateral damage when air strikes are used, but ‘Major G’ revealed  in detail how a drone operator sitting somewhere in Israel can clear a target on the ground in Gaza of innocent civilians.

The IAF is examining a new camera, which will allow UAVs to collect intelligence invisible to the human eye and assist in locating explosives and underground bunkers.- Photo Courtesy: Israel Air Force

“In a lot of cases we have regular houses where in the basement there is a lot of ammunition, bombs and missiles. The house is populated sometimes with the families having willingly cooperated with the Hamas, and in other cases they don’t have any choice; Hamas forces this on them. In cases where there are people inside a house or building we never strike the target without prior warning. We make phone calls, send leaflet flier warnings, and sometimes use a technique called ‘Knock On the Roof,’ where we fire very, very small, very precise tiny bombs onto the edge of the roof and then they (the family) know that the attack is about to begin and everybody can go outside.”

But even the best intelligence and prior warnings cannot always prevent civilian casualties caught up in the fog of war, as happened in the widely reported case of the Dalou family in Gaza, nine of whom were killed by a single Israeli missile strike.

FoxNews.com asked the Israel Defense Force for an official explanation on the loss of life at the Dalou house and received the following statement:

“The IDF targets only terror related sites based on carefully collected intelligence. All possible precautions were taken as the civilians in Gaza were not targets in this operation. The Dalou residence was known to the IDF intelligence as a hideout of a senior militant operative in Hamas’ rocket launching infrastructure. While the IDF regrets the loss of life on both sides, the responsibility ultimately lies with terror operatives who use the civil population as human shields when using civilian buildings as hideouts, or to store weaponry.”

The latter part of the IDF statement has been backed up by Human Rights Watch, which also slammed the Palestinians for randomly attacking densely populated civilian areas in Israel.

“Unlike during previous fighting, armed groups seem to have fired many rockets from underground tunnels, opening a hatch to launch the munition,” HRW stated in its Dec. 24 report. “Under the laws of war, parties to an armed conflict are required to take all feasible precautions to protect civilians under their control from the effects of attacks and not to place military targets in or near densely populated areas. Human Rights Watch has not been able to identify any instances in November in which a Palestinian armed group warned civilians to evacuate an area before a rocket launch.”

Of the Palestinian attacks on Israel, HRW noted, “The absence of Israeli military forces in the areas where rockets hit, as well as statements by leaders of Palestinian armed groups that population centers were being targeted, indicate that the armed groups deliberately attacked Israeli civilians and civilian objects. Anyone who commits serious laws-of-war violations intentionally or recklessly is responsible for war crimes.”

But the killing of two Al-Aqsa TV journalists in an Israeli missile strike on a media center during the Gaza conflict was also criticized by Human Rights Watch, even though Israel insists the building had been used for launching missiles.

“Just because Israel says a journalist was a fighter or a TV station was a command center does not make it so,” said Sarah Leah Watson, HRW’s Middle East director. “Journalists who praise Hamas and TV stations that applaud attacks on Israel may be propagandists, but that does not make them legitimate targets under the laws of war.”

One of the first points stressed by ‘Major G’ is that the background to many missiles strikes is extensive surveillance and monitoring by various branches of the military and intelligence services for weeks, months, or even years prior to the moment of the strike. Although he didn’t discuss the specific case of Ahmed Jabari, this was evident in the strike that killed the high ranking Hamas terrorist mastermind, the spark that finally ignited November’s hostilities.

According to British newspaper The Daily Telegraph, “Jabari took security so seriously that few ordinary Palestinians in Gaza had ever seen him on their crowded streets, although everybody knew his name. He had stayed one step ahead of his Israeli enemies for years, moving house constantly and hardly ever showing himself in public.”

Jabari, the brains behind the kidnapping of Israeli soldier Gilad Shalit in 2006 and a host of bombings and attacks against Israel, had been well aware that he was a target and used a fleet of ten cars to confuse drone operators and Israeli intelligence operatives on the ground in Gaza. Israel’s Channel 10 TV reported that on the day in question solid information reached the IDF that Jabari was in a particular car and that the opportunity had at last arisen to eliminate him. That opportunity, when it came, was seized within moments by Israel.

“Since the Second Lebanon War, we have developed a new technique called TCT; Time Critical Targets, targets that have a very short lifespan, ‘Major G’ said. “We (drones) find them, gather enough intelligence to confirm that this is actually a terrorist, then call for another aircraft to perform the attack.”

The Jabari case was one example of the TCT policy, and ‘Major G’ gave a very rare insight into another. “As another example from the latest Pillar of Defense operation in Gaza, we had intelligence that told us that Hamas terrorists were about to launch missiles. We scanned the area and then saw two people running away right after the launch. A basement (trap) door had closed behind them and nothing was left to be seen (of the missile launch site). This was very complicated because I didn’t know if the people running away actually performed the launch, so we turned immediately to other people who were able to check this out with verified intelligence to confirm that these were indeed the suspects. We called the helicopter and he performed the attack. All this process took less than a minute.”

Looking back on the Gaza conflict, ‘Major G’ summed up his view of how his drone unit and the IDF as a whole had performed.

“We managed to achieve all of our objectives,” he said.  Nevertheless, there are always things that we can learn…and do better the next time. Our former Chief-of-Staff, Gabi Askenazi, said, “The military can be for two things; either preparing for a war, or being at war. We are prepared for every kind of scenario.”

Paul Alster is an Israel-based journalist who blogs at www.paulalster.com