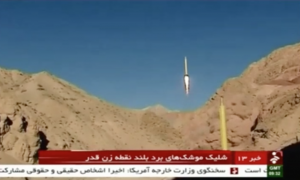 Conspicuously neglected in the American sponsored nuclear agreement with Iran, the UN passed resolution 2231, which stated that Iran could not conduct ballistic missile tests, making the test that occurred on Sunday outside Semnan, about 140 miles east of Tehran, a direct violation of the UN resolution.

US officials say that Iran has conducted a ballistic missile test in violation of the UN resolution put in place after the Iran nuclear deal.

Officials told Fox News on Monday, that the test occurred outside Semnan, about 140 miles east of Tehran, on Sunday.

The missile in question was the Khorramshahr medium-range ballistic missile, which the officials said flew 600 miles before exploding, in a failed test of a reentry vehicle.

The test was in direct violation of UN resolution 2231, which stated that Iran could not conduct such acts.

During his campaign, US President Donald Trump expressed his opposition to the nuclear deal reached last year between Iran and worlds powers.

Trump has called the Iran nuclear deal, formally known as the Joint Comprehensive Plan of Action, one of the worst deals in history.

In an October address to supporters in Jerusalem, Trump vowed that he would stand up to Iran.

The United States and Europe lifted sanctions related to Iran’s nuclear program when the deal went into effect in January 2016.