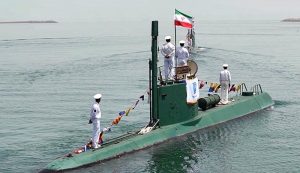 US news outlets report the Iranian Navy tested an advanced submarine launched torpedo in the Strait of Hormuz, considered to be one of the world’s most strategically important shipping corridors.

US news sources reported Monday evening that Iran tested an advanced torpedo missile near the Strait of Hormuz.

Senior officials in the American security infrastructure told Fox News and NBC that the experiment was conducted within Iran’s maritime border and did not violate international law, but noted that it is considered to be another Iranian provocation following the increasing tensions between the states since President Donald Trump’s inauguration.

According to Fox News, the missile that was tested has a range of more than nine-and-a-half kilometers and can travel at a speed of 400 kilometers per hour.

American security sources told the news channel that it is not clear whether the experiment was successful, adding that it imposed no danger on American forces in the area.According to NBC, the last time that the Iranian army experimented with this missile was in February 2015.

The Strait of Hormuz is a strait between the Persian Gulf and the Gulf of Oman. It provides the only sea passage from the Persian Gulf to the open ocean and is one of the world’s most strategically important choke points.