According to the report, as part of the agreement Egypt agreed to open the Rafah border crossing with Gaza twice weekly to start with before opening it on a permanent basis. In exchange, it demanded that Hamas allow the Palestinian Authority to oversee the border between Egypt and the Palestinian enclave.

Hamas has also been asked to refrain from inciting against the Egyptian regime and interfere in Egyptian internal affairs, especially in the restive Sinai Peninsula.

The sources said that the Islamist group also asked Egyptian authorities to remove the group from their terror blacklist.

The report of the reconciliation has not been confirmed by Egyptian officials or Hamas. 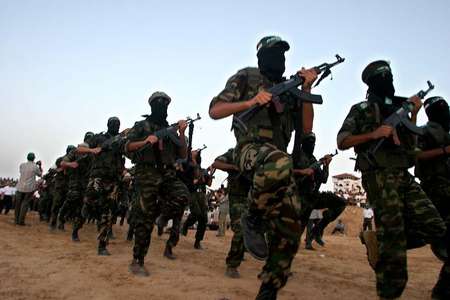 Masked Hamas militants take part in a 2005 rally next to the Gaza-Egypt border in Rafah – Photo: Said Khatib (AFP)

It comes after the Egyptian government earlier in the day appealed a court ruling that only two weeks ago had labeled the Islamist group a terrorist organization.

The Cairo Appeal Court for Urgent Matters announced it would hear an appeal by the Egyptian State Lawsuits Authority against the lower court’s decision to label Hamas a terrorist group, the Egyptian daily Al Ahram reported.

The appeal hearing is slated to take place on March 28.

In late February, an Egyptian court ruled that the Palestinian organization Hamas was a terrorist group after a court had banned Hamas’ armed wing, the Ezzedine al-Qassam Brigades, a month earlier.

Hundreds of Hamas supporters marched in the Gaza Strip at the time to protest the decision.

Waving the green flag of the movement, which is the de facto power in the coastal Palestinian territory, demonstrators chanted “Hamas is not terrorist” and “Hamas is our pride” during the rally in the northern Gaza town of Jabaliya.

In a speech to the crowd, senior Hamas official Mushir al-Masri said that Saturday’s ruling against the militant group’s Ezzedine al-Qassam Brigades was “political” and meant to “conceal failure and the lack of security in Egypt at this time.”

The verdict followed a complaint from a lawyer accusing the Hamas armed wing of direct involvement in “terrorist operations” in the Sinai, which borders Gaza, a court official said.

The lawyer also accused the movement of using tunnels under the frontier between Egypt and Gaza to smuggle arms used in attacks against the police and army, the official added.

Egypt accused Hamas, which is close to Morsi’s Muslim Brotherhood, of supporting the blacklisted Egyptian movement.