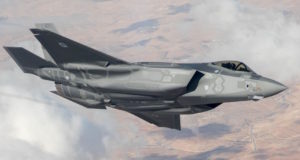 Sources quoted in Al-Jarida stated that two stealth fighters flew over Syrian and Iraqi airspace to reach Iran, and even targeted locations in the Iranian cities Bandar Abbas, Esfahan and Shiraz.

The report states that the two fighter jets, among the most advanced in the world, circled at high altitude above Persian Gulf sites suspected of being associated with the Iranian nuclear program.

It also states that the two jets went undetected by radar, including by the Russian radar system located in Syria. The source refused to confirm if the operation was undertaken in coordination with the US army, which has recently conducted joint exercises with the IDF.

The source added that the seven F-35 fighters in active service in the IAF have conducted a number of missions in Syria and on the Lebanese-Syrian border. He underlined that the fighter jets can travel from Israel to Iran twice without refueling.

Israel has admitted to launching about 100 air strikes on Syria over the past five years, targeting Hezbollah terrorists, weapons convoys and infrastructure, and it is believed to be behind dozens more.

On March 21, the IDF cleared for publication that Israel was behind the 2007 destruction of a nuclear reactor that was under construction in northern Syria.

In February, Israeli F-16 fighter jets entered Syrian airspace, striking 12 Iranian targets in Syria in response to an Iranian drone that was shot down over Israel. Two Israeli crew members were wounded when they ejected from their jet before it crashed, which was later determined to be caused by pilot error.

In response to the Iranian drone, a senior Israeli official warned that Israel will react with force to Iran’s efforts to entrench itself further in Syria.

“…the Iranians are determined to continue to establish themselves in Syria, and the next incident is only a matter of time,” he said, warning that Israel does not rule out that that the Islamic Republic will continue to try to attack Israel.

Annie Ahronheim contributed to this report.