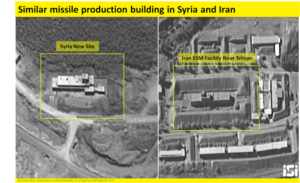 ImageSat International, which operates the Eros-B satellite, released high-resolution images that it said show that Damascus is currently building factories “with great similarity to missile factories in Iran.”

The site near the coast in northern Syria appeared to include a long-range missile facility as well as a storage area, the company said.

ImageSat said the images proved the accuracy of previous reports that Iran was overseeing the construction of a missile facility in Syria.