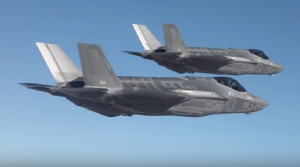 Flames and smoke from the Mazzah military airport outside Damascus, following an explosion at an ammunition and weapons stockpile. – Screenshot

Israel has repeatedly warned that it would respond forcefully to any aggression from the Syrian side of the border.

While the Israeli government would neither confirm nor deny involvement in the Damascus bombing, journalist and military expert Ron Ben-Yishai said it was likely meant to prevent the delivery of Iranian missiles to Hezbollah.

The attack was part of the “war between the wars,” Ben-Yishai wrote in an article for the Ynet news portal.

A Syrian military source told Russian media that the Israelis had used their new US-made F–35 fighter jets in the attack.