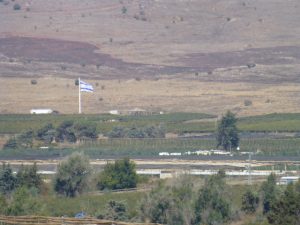 Israeli prime minister Benjamin Netanyahu was dissatisfied that the ceasefire was announced without any reference made to Iran’s military presence in Syria — where it is a key backer of of president Bashar Al-Assad and Hezbollah, the Shiite militia in Lebanon.

The paper, without citing sources, reported that Israel put forward its demand that the ceasefire arrangements include a buffer zone in which Iranian forces would be banned, from between 60 to 80 kilometers from the border between Syria and the Israeli-annexed Golan Heights.

Russia would only promise not to allow such forces within 5 kilometers of the border, the report said. It did not say what the United States’ position on the Israeli demand was, however the ceasefire went into effect days later.

It was seen as a sign of rare successful co-operation between Russia and the United States in tamping down the long-running Syrian civil war.

Israeli intelligence has not detected any Iranian activity close to the border since the ceasefire came into effect, Haaretz reported, however military officials believe it will gradually establish a presence in the area with the aim of opening up a second front against Israel if another war against Hezbollah breaks out.

Israel believes that Iran is pumping around $800 million per year into Hezbollah, whose political wing is a part of Lebanon’s government, both Haaretz and Walla reported, neither citing sources.

Walla also reported that Russia and Israel are keeping each other abreast of their actions in Syria and in the skies, with regular meetings between the two parties.

Netanyahu has been a frequent visitor to Moscow since Russia intervened in the Syrian war on behalf of Assad in 2015, with Israel wishing to maintain its freedom to carry out air strikes on Syrian territory.

The flurry of stories coincided with the Israel Defense Forces (IDF) announcement that a two-week drill in the north of Israel rehearsing for a war with Hezbollah — which they said was the largest such exercise in decades — had concluded.

Intelligence and combat co-operation, defensive capabilities and maintaining military capacity during an evolving situation were all tested over the two week drill, which involved the army, navy, air force and intelligence units, the IDF said in a statement.

The IDF also rehearsed evacuating residents from the north of the country.

At the beginning of the drill, a senior IDF officer told Haaretz that the aim was to “test the fitness of the Northern Command and the relevant battalions during an emergency” and that during the drill, the forces will receive a mock command from the cabinet to liquidate Hezbollah’s military capabilities, rather than just subduing the group.