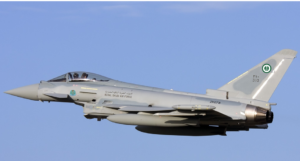 “Saudi fighter jets have been spotted along with other fighter jets that have attacked facilities and positions belonging to Iranian militias,” said an unnamed source to the Independent in Arabic. The attacks targeted positions belonging to the Quds force of the Iranian Revolutionary Guard Corps in Albukamal and other areas near the Iraq-Syria border.

According to the source, it is believed that Iran was about to use the facilities to hit other targets after targeting the Saudi Aramco oil facilities on Saturday. The source added that the Global Coalition Against Terrorism has started targeting not just ISIS, but also other groups such as the Quds Force, as well as various Iraqi and Iranian militias active in Syria, Iraq and other areas.

Saudi sources later denied the report, according to the Independent.

Pro-Iranian militias in Albukamal in Syria near the Iraqi border have been targeted by multiple air strikes since Monday night, resulting in at least 15 deaths, according to Arab media.

On Wednesday, five people were killed and another nine were wounded in an air strike carried out by unidentified aircraft that targeted positions of the Iranian-backed Iraqi Popular Mobilization Forces militia in Albukamal, according to Sky News Arabia.

After the strike on Wednesday, the PMF in the town of Al-Qaim in Iraq near the Syrian border began to take precautionary measures in anticipation of an air strike, including not assembling in large groups and the deployment of heavy weapons near some sites.

On Tuesday, the Lebanese Al Mayadeen news site reported that four airstrikes targeted positions belonging to Iraqi factions near the Iraq-Syria border. No injuries were reported in the strike.

#SOHR 10 casualties, an ammunition depot destroyed are the result of the airstrikes that targeted the #Iranian Forces and their loyal militias in al- #Bokamal area east of #DeirEzzor https://t.co/jgw5YYMJOT

On Monday night, 10 militants were killed in air strikes by unidentified aircraft that targeted an ammunition depot and two other sites belonging to the Popular Mobilization Forces or other pro-Iranian factions in the area of Albukamal, according to the Syrian Observatory for Human Rights. Heavy material damage was also reported.

The death toll was expected to rise as some of the injured were in serious condition.

The director of the Syrian Observatory for Human Rights stated that according to the information that they have, the air strikes on Monday night were likely carried out by Israel.

Al Hadath reported that the remains of 16 Iraqi militants killed in the attacks in Albukamal arrived in Iraq on Tuesday.

The Syrian army denied the reports, claiming that there were no air strikes or air activity over Albukamal on Monday night, according to Al Masdar news.

On September 9, air strikes allegedly carried out by Israel destroyed a military base in the area under Iranian control, according to the Syrian Observatory for Human Rights.

Rockets were fired at Israel from the outskirts of Damascus by a Shi’ite militia operating under the command of the Iranian Islamic Revolutionary Guards Quds Force after the attack on September 9.

Seth J. Frantzman and Anna Ahronheim contributed to this report.