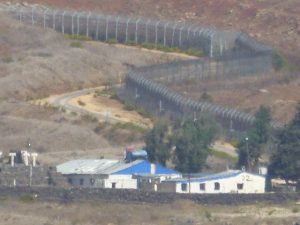 The agreement addresses, the report claims, Israeli and Jordanian demands that the Hezbollah terrorist organization and Iranian proxies and pro-Iranian militias be forbidden from approaching the border on the Golan Heights.

Former American diplomats however believe that enforcing such a restriction would carry extreme difficulties.
“The question is, who is going to enforce that? Is Russia going to take on the responsibility for telling Iran what to do?” Gerald Feierstein, a former US diplomat said to the Foreign Policy magazine. “Iranians are much closer to Assad’s position on the way forward in Syria than the Russians are.”

Others however, are slightly more optimistic of the plan’s success. Andrew Tabler, a fellow at the Washington Institute for Near East Policy, for example, pointed to southwestern Syria’s relative calm—and the White House’s influence among US-trained factions fighting Assad’s regime—as proof that it was a natural ground for US and Russian cooperation.

“I think it’s worth a try,” Tabler told the magazine. “If we’re going to test something, this is a good place to test it.”

Fred Hof, a former State Department special advisor, says stipulations in the agreement were inserted purely to allay Israeli concerns. These included, for example, demands to ensure that southern Syria would be off limits for fighters of ‘non-Syrian origin,’ which would include Iranian troops and their proxies, along with forces linked with ISIS and other terror groups.

“This could be designed mainly to reassure the Israelis that these elements would not be operating in proximity to the Golan Heights,” said Hof.