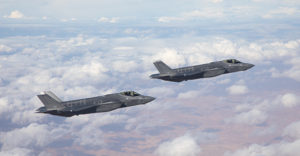 According to the report, which cites Western diplomatic sources, the strikes targeted missile warehouses of the Iranian Revolutionary Guards. It was one of a series of explosions in recent weeks at weapons depots, bases or positions belonging to Iran-backed military groups in the country.

The sources said that Russia and the U.S. have agreed that Israel’s actions in Iraq and Syria are vital “in ensuring Israel’s security,” and – according to the understandings – the officials in Jerusalem are not obliged to claim the attacks in order not to escalate the already volatile situation in the region.

On Tuesday, several explosions rocked the military positions held by the Popular Mobilization Forces – a state-sponsored umbrella military organization which includes Iran-backed militias – near Balad air base north of Baghdad.

Balad base hosts U.S. forces and contractors and is located about 80 kilometers (50 miles) north of Baghdad. A PMF group backed by Iran is stationed nearby.

The military official said the intended target of the blasts was the group’s position near the base. The paramilitary source said his group’s weapons depot was specifically targeted by an aerial bombardment.

Iraq’s Defense Minister Najah al-Shammari visited the site shortly after the incident, telling Iraqi state television that fires resulting from the blast had been put out and that some military personnel had suffered minor injuries.

Witnesses said the explosions caused stored rockets to fly into nearby farmland and into Balad base itself, and residents in the area fled their homes fearing rockets might land on them.

Sky News Arabia reported that at least 50 missiles had exploded at the warehouses that were targeted in the strikes.

Some analysts have suggested the strikes might have been carried out by Israel, which last year signaled that it could attack suspected Iranian military assets in Iraq, as it has done with scores of air strikes in Syria.

Prime Minister Benjamin Netanyahu addressed the attacks on Tuesday evening shortly before his return flight from Ukraine’s capital of Kiev. “There are major security challenges which are explained in the report I received a few minutes ago,” he said, adding that he receives intelligence reports on a daily basis.