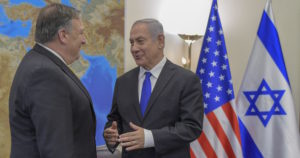 Last week, Matt Lee of Talking Points Memo reported that the Trump administration, led by US Secretary of State Mike Pompeo, is working hard to repeal, delay or amend an October law on the issue.

Mike Pompeo speaking to rally outside the US Capitol. – Photo: Wikimedia/Mark Taylor

Any change or delay of the law would need to be done sometime around the next week to sneak it in before the law goes into effect and before Congress changes over.

If the legislation is not blocked by then, it would, among other impacts, restore the Sokolow case – in which a US federal court ruled that the PA must pay hundreds of millions of dollars to the families of the American victims of Palestinian Authority-aided terrorism during the Second Intifada.

The February 2015 ruling was later overturned by higher US courts and the newly passed law was an attempt to circumvent the higher court rulings before a deadline passed for such a move.

But Sokolow lawyer Kent Yalowitz of Arnold & Porter said that the US State Department is trying to undo the positive impact of the law for the families of victims of the Sokolow case under a threat by the Palestinian Authority.

The PA has threatened that it will cease security cooperation with Israeli security forces if the US does not repeal, delay or amend the law and that it does not have sufficient funds to pay the victims’ families.

Security cooperation between PA and Israeli security forces is considered a linchpin of Israeli national security in handling threats from Hamas in the West Bank.

Yalowitz explained that a variety of direct and indirect sources in Congress and the State Department are warning that the ruling would “bankrupt the PLO,” and that the real push for delaying the law may be from Senior Advisor Jared Kushner’s desire to smooth things over with the PA leading up to the rollout of his peace plan.

The big question in all of this is whether the law would actually bankrupt the PA or whether it is an idle threat.

On the one hand, the Trump administration has already cut dozens of millions in aid to the PA this past year, which could mean that the PA really is in worse shape than in the past.

On the other hand, the PA is still managing to pay funds to the families of someone who was killed or imprisoned by Israel for terrorism.

Abbas’ pensions to terrorists totaled approx. $330 million, or about 7% of the Palestinian Authority’s $5 billion budget in 2018

This is one tactic the PA uses to try to endear itself to parts of the Palestinian public that views terrorists as heroes.

Critics add that the PA will not end cooperation with Israel’s security forces because those forces also help the PA stay in power against plots by Hamas.

Shurat Hadin director and the Sokolow plaintiff’s lawyer Nitsana Darshan-Leitner, who brought in Yalowitz, said: “No one disputes that the blood of these American victims is on the hands of the Palestinian Authority. After a two-month-long trial, a New York jury found the PA liable for 25 charges of terrorism, including the murder of students in the Hebrew University Cafeteria bombing.”

“Now once again, for the second time, the State Department is throwing these US families under the bus… The claim that the PA does not have the funds to pay the court award is a blatant and demonstrable lie,” she said.

Darshan-Leitner continued: “Every single month the families of the suicide bombers and imprisoned terrorists who murdered and maimed the plaintiffs in this case receive their stipends from the PA and it amounts to many, many millions of dollars that should be paid to the victims.”

“When will the State Department actually do something to act on behalf of these American families?” she asked.

To date, the US State Department has merely said it is following the issue.