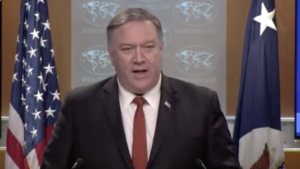 In the case of the Golan Heights, captured by Israel in the 1967 war, the report classifies the mountainous region on the border between Israel and Syria as “Israeli-controlled” instead of “Israeli-occupied,” as it has read in past years.

In a separate section on Gaza and the West Bank – areas that also came under Israeli control in 1967 – the report also does not characterize these territories as under “occupation” or “occupied.”

Shortly after the release of the report a spokesperson for the US embassy in Jerusalem told The Times of Israel that “our policy on Golan has not changed.”

US Secretary of State Mike Pompeo presented the report in a briefing on Wednesday, but he did not comment on its analysis of Israel, the West Bank, or Gaza.

The US @StateDept has dropped ‘occupied’ with reference to the Golan Heights. Does this mean the US plans to recognize the area as part of #Israel in the near future? @ShaynaEstulin has more: pic.twitter.com/Hi9LLwcgqa

The report says Israel’s democratic institutions are robust and notes the Jewish state maintains a free press, free and fair elections, the rule of law, as well as an independent judiciary, according to a press release from the US embassy in Israel.

It also discusses the ongoing conflict between Israel and militant groups in Gaza, specifically noting violence and death resulting from Palestinian demonstrations on the border beginning March 30, 2018.

“Israeli forces engaged in conflict with Palestinians at the Gaza fence,” the US embassy statement reads, “including armed terrorists, militants who launched incendiary balloons into Israel, and unarmed protesters, reportedly leading to 190 Palestinian deaths by the end of the year.”

In addition, it discusses the Israeli Knesset’s (parliament) passing of the Nation State basic law, which recognizes only the Jewish People as having a national right of self-determination, noting the law’s promotion of “Jewish settlement.”

“In areas controlled by the Palestinian Authority, there were allegations of torture of political prisoners; restrictions on freedoms of expression, including for members of the press, forced labor, and child labor,” the statement reads, noting additional human rights abuses in Gaza under Hamas rule.

With my good friend, Senator @LindseyGrahamSC, today in the Golan Heights. The Golan Heights will always be part of Israel. It is important that the international community, especially our great friend the United States, recognizes this fact and accepts it. pic.twitter.com/joXEB9URX7

“The fact that the definition ‘occupied territory’ is missing from an official document of the State Department is an important step for Israel’s foreign relations and for the future of the settlements,” Hotovely said.

The new report comes after US Senator Lindsey Graham on Monday said he would propose the Senate recognize Israel’s sovereignty over the Golan Heights.

The Golan Heights were captured by Israel from Syria in the 1967 six day war, and finally annexed by Israel in 1981 during Menachem Begin’s period as prime minister.

Israeli Prime Minister Benjamin Netanyahu, meeting Graham for a tour of the Golan, reiterated his position that the Golan Heights have to remain a part of Israel and that the international community should recognize the Jewish state’s sovereignty over the disputed area.